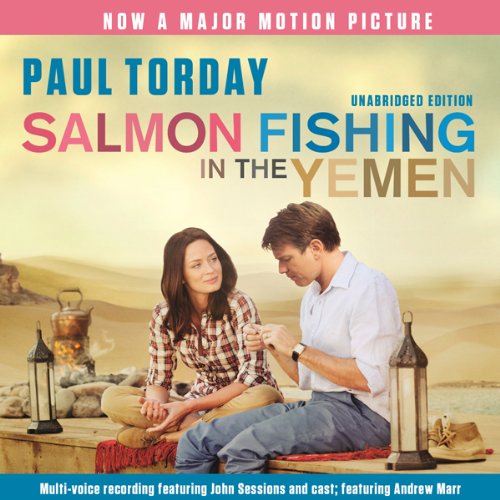 Shortlisted for the British Book Awards, Newcomer of the Year, 2008.
A Richard and Judy Summer Read Selection.

Written as a "report into the circumstances surrounding the decision to introduce salmon into the Yemen", this is a novel that is made up of e-mails, letters, diary extracts, records of the prime minister's Question Time, interviews, and chapters from the memoirs of a fantastically weaselly Peter Mandelson-type figure.

The "Yes Minister" comparisons are justified (and there is some brilliant, hilarious political and bureaucratic satire here), but at its heart, this is the story of a hen-pecked, slightly pompous, middle-aged scientist who finds himself caught up in what seems like an impossible project, and of how this project changes his life. In the process, he becomes an unlikely and rather loveable hero, discovers true love for himself, finds himself both a pawn and then a victim of political spin, leaves his brilliantly horrible wife, and learns to believe in the impossible. And he takes the listener with him in the process.

"An entertaining and successful debut... it is warmly recommended to anyone searching for feel good comedy with surprising bite." (The Sunday Times)
"The intelligence, inventiveness and humanity of this novel in comparison to the usual run of literary fiction is as wild salmon to the farmed."(Daily Telegraph)
"[It] succeeds in an ambitious project: making a book about fishing readable, even touching. Fish may not be your bag, but it is the capacity for commitment and belief that makes for good reading."(New Statesman)
"Entertaining storytelling with great characters and laugh-out-loud plot."(Woman and Home)
"A wickedly comic first novel about the power of money and the miracle of faith."(Saga)
"A lovely musing on how risking it all - however much it may be perceived as foolish or ridiculous, can bring hope and faith and love to the most bleak of outlooks..." (Scotland on Sunday)

A wonderful book, well dramatised, full of English humour. A joy to listen to.

A wonderful light read - hilarious and melancholy in turns, and filled with observant political lampoon. Buy the unabridged version - its too good to settle for a pruned version

What a great fantasy this is -- converting sand into salmon runs and the characters are both remarkable yet credible. Top listen.

Absolutely.Different voices make it easy to listen to and believable

Accents and an added dimension of each character

Yes...but not the time

I like the way they read all the e-mail addresses...it made one feel as if I were at the computer reading the e-mails

If you could sum up Salmon Fishing in the Yemen in three words, what would they be?

The way it is told, by emails, notes, excerpts from the congress, from Al Qaeda communications, from diaries. All the remarks about fishery are understandable for those who don't know anything about it. The way that the main character isn't the center of the history is also great

No, I haven't, but the narrators does an excellent performance

It's really great. There plot and the narration are very well made

The premise does echo the craziness of government policy in all countries. Paul Torday's 'Salmon Fishing' is a romp... he really plays with some interesting ideas. The book is a bit of a tapestry though - with some thematic elements not quite fitting. The humour can be a tad obvious - not evident in Torday's earlier 'Irresistible Inheritance' (which is a great read). The narrative strides along and is an enjoyable journey into insanity and inanity that shapes so much of the geopolitical economic landscape today.
Recommended.

Paul Torday’s book is an absolute must! If you enjoyed the movie “Wag the dog” and the UK TV series “Yes Minister / Yes Prime Minister” you’ll love this. It’s low-key British humour at its absolute best, narrated in deadpan manner by an excellent cast.

Having seen the movie (several times) - and having thoroughly enjoyed it - I decided to listen to the book.

Whilst the movie adaptation was good - I came to enjoy the book more. It was a bittersweet story and not quite as saccharine at the end - which O rather liked.

The cast was excellent, I thought.

It is a sad fact that I like happy endings, and this book does not have one. It is beautifully written, and engrossing, but for the characters and myself the adventure ends up being at best, a waste of time. At worst, the characters lose everything in their chase of this foolhardy dream, and not through anything they have done themselves.
It's more a comment on British bureaucracy and the blame others, take no responsibility attitude that seems to pervade British politics and the workplace, with no concern for the impact on otherwise innocent lives.
The writing format of letters, emails and diaries is very effective, although the diaries are possibly a little more literary and descriptive than one would expect from scientists. However, the highly improbable plot becomes very believable as a result of the delivery mechanism.
If you like happy endings, skip this one. If you like a good yarn, then don't miss it.

What an absolutely superb book! Thoroughly entertaining right from the very start. You get so involved with the characters that you are simply willing the salmon project on, right to the very end. With extracts from letters from everyone including, government and terrorists it builds to an ending where you just die to know what happens.

This works really well as a narrated story (perhaps better than reading it might have been). Hearing the different characters through email correspondence, diaries, interviews etc, works really well. It's funny, sad and at times tragic, but still leaves you feeling uplifted. l was hooked after the first couple of chapters. Warmly recommended.

An easy read, a little romantic at times but unexpectedly more enjoyable than the twee title led me to expect. the stories of the Yemen kept me interested as did hte project itself, the love interest was a little obvious though the many speakers in the story made it very entertaining. Mary was particularly entertaining. easy holiday read

Engaging from one end to the other!

What a fantastic find! Fiction that is so real, so convincing, that it is only the name given to the Prime Minister that reminds one. Beautifully read by several different people for the various characters, a sad and riveting tale unfolds, the outcome hidden to the very very end. Well worth it, one of my better downloads.

An unusual topic which turns out to be a winner

I cannot remember how I came to purchase this book but I am very pleased that I did so.

Outstanding narration and characterisations which bring the characters to life.

Without doubt the best book that I have 'read' for some time.

What more can I say.

The story starts and ends with wonderful political satire. Some of the characters feel very close to real figures - though whether I imagine the same ones as anyone else is open to question. This is then blended with a lovely tale of discovery & hope.
All is then read by a superb cast who really bring the characters to life. It's coming out as a film but I can't see how it can come anywhere close to this audio version.

I agree a good listen. Sad, topical but uplifting. Probably enjoyed most by those disappointed with government and politicians, but wish they were not. You will laugh and you will cry.

A real justification for the Audible experience

I normally alternate reading a book with listening to a book. Often my choice of method is arbitrary and pure chance. In this case I am so pleased that I heard the book first or I would not have caught the variety of tone between the sections of this novel. I would have missed the irony and satire of the bureaucratic communications and the contrast between the exchanges of the individuals. The choice of different readers in this production contributes to the enjoyment of the subtlety of the writing.

I'm not sure what this would be like to read but it makes terrific listening. It's the ridiculously high-concept story of an immensely wealthy Arab Sheikh who falls in love with salmon fishing on his estate in Scotland and hatches a plan to introduce it to the Yemen, despite apparently insuperable natural obstacles.

It's told from the point of view of a rather nerdy fisheries scientist who is reluctantly roped into the project but becomes entirely obsessed by it, and features a great cast of characters, notably, the self-important Director of Communications to the Prime Minister, who is clearly based on Peter Mandelson. The book is narrated by John Sessions who does a superb job in bringing the characters to life.

It goes a bit over the top in the middle with the introduction of a quiz programme for the Arab world dreamed up by Peter Maxwell whose occido-centric tunnel vision becomes a bit implausible. Nevertheless, it's thoroughly entertaining.

I made a mistake in choosing this. I was feeling a bit down and looking for something light and frothy, and then was misled by the press reviews that described it as a 'feel good comedy'. Personally, I just found the pompous characters pompous, the Peter Mandelson type character unconvincing and the religious sheikh deeply irritating. There's a lot of middle eastern politics and some personal tragedy. I think I particularly disliked it because it was so different from what I was expecting. It might work better if approached with different expectations.