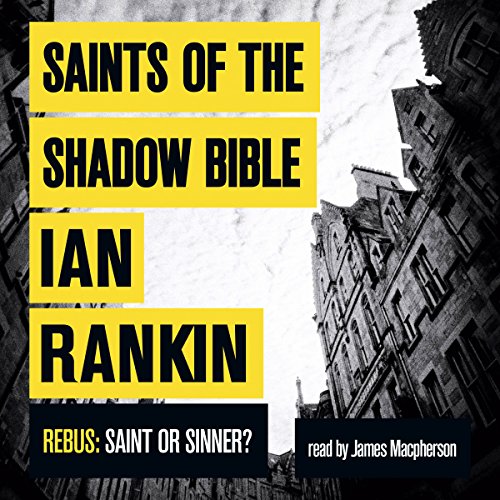 Saints of the Shadow Bible

Saints of the Shadow Bible

Saints of the Shadow Bible, written by Sunday Times number one best-selling author Ian Rankin is Book 19 of the infamous crime thriller audiobook series, Inspector Rebus and is narrated by Taggart star James MacPherson. Hear Inspector Rebus at his best. The morals of good and bad will be tested and police credibility questioned as Inspector Rebus must defend the mistakes of his colleagues’ pasts. Find yourself so involved in this plot you will be speculating whether a sinner can ever really become a saint. Available now from Audible.

Rebus is back on the force, albeit with a demotion and a chip on his shoulder. A 30-year-old case is being reopened, and Rebus's team from back then is suspected of foul play. With Malcolm Fox as the investigating officer are the past and present about to collide in a shocking and murderous fashion? And does Rebus have anything to hide?

His colleagues back then called themselves 'the Saints', and swore a bond on something called 'the Shadow Bible'. But times have changed and the crimes of the past may not stay hidden much longer, especially with a referendum on Scottish independence just around the corner.

Who are the saints and who the sinners? And can the one ever become the other?

Features a bonus interview with Ian Rankin and James MacPherson.

Read by James MacPherson. James MacPherson played DCI Jardine in Taggart for sixteen years, and has acted on stage in plays as diverse as The Taming of the Shrew and ART by Yasmina Reza. He has presented a regular books programme for Radio Scotland - for which he has interviewed Ian Rankin. He won a Spoken Word Gold Award for his reading of Strip Jack, a Crimefest Audible UK Sounds of Crime Award for Doors Open and has narrated all the Ian Rankin Rebus books. James lives in Glasgow.

What listeners say about Saints of the Shadow Bible

Narrator changed everything for me,

Couldn't get into it like previous editions.... OK but not great. Preferred previous narrator.

Great for background story wile diy or car journey. We really like narration and quite like the story. It was nice and easy to listen, quite nice to match the places where action take place with familiar places in Edinburgh.

What made the experience of listening to Saints of the Shadow Bible the most enjoyable?

The reader is a genuine pleasure to listen to.

No. But the plot never does in Rankin's books. These are guilty pleasure reading, and perfect for comfortable listening or reading with a cup of hot chocolate on snowy day.

Which character – as performed by James MacPherson – was your favorite?

I don't have a favorite. I just like MacPherson's work.

No, but that's rarely the case anyways.

If you like Rankin, and if you like his Rebus novel you can't go wrong with this one. On the other hand this is a terrible, terrible place to start reading Rankin's book.

Yes, yes, yes, Rankin right back on top of form!

I must admit that 'Standing in another man's grave' was a disappointment to me. It didn't feel like Rankin had found the true voices of his separate characters, Rebus and Fox and I found the mix of them both in the same book an uneasy one. It was good, of course, but I just didn't feel it was the top notch story that us Rebus fans had come to expect. Well, Rankin is back with a vengeance! As I progressed through 'The Saints' the book it just got better and better; great plot and twists and turns, but also the interplay between the main characters was a total pleasure.

James MacPherson is 'the' voice when it comes to Rankin books as far as I am concerned - great job as always. So, for anyone who, like me, began to wonder if Rankin was slipping, you really need to listen to this one - you won't be disappointed!

I was looking forward to this book coming out having listed to all of the Ian Rankin series and this latest offering didn't disappoint. Yet again I listened to the audio book last thing at night and whilst getting ready to go to work in the morning. Some books are so enthralling you just want to keep reading and this achieved the audiobook equivalent of just listening to 'one more page'.

Back to previous high standards

Like others it seems I was not overly taken by "Standing in Another Man's Grave", the juxtaposition of the characters just seemed a little awkward to me. This time it felt as if they (or maybe I!) had settled into the new positions and gotten used to them. That aside it's classic Rebus with the "Saints" presented in varied shades of grey throughout so until near the end you were never quite sure about their precise nature.

James McPherson is the definitive Rebus narrator and is excellent throughout. Well worth getting this one!

lost interest in Rebus as did the author I fear

I have read quite a few of Ian Rankin's Rebus novels and enjoyed them. I only got just over half way through this one and gave up. I found I wasn't interested in what happened to Rebus or the case he was working and felt the author wasn't much interested either. Time to retire the old copper I think.And keep him retired this time! The case was uninteresting and we follow the police as they "plod" along, slowly, slowly putting the pieces together. There is very little action, just a lot of dialogue with Rebus meeting up with his old cronies who may or may not be involved in a crime. Frankly, I couldn't have cared less.The pace is too slow and the characters are not that interesting. Rebus has lost his appeal and it seems, his volatile personality. Perhaps the second half of the book really speeds up and offers some excitement but I prefer to give up and move on to something more interesting. If you like a good crime novel then I would recommend Ken Bruen. His books are faster paced, witty, gritty and full of interesting characters. My only complaint is that the Ken Bruen books are too short

Thoroughly enjoyed the storyline of this, the latest rebus book. Very well narrated again and fantastic interaction between the characters.

I really enjoyed the narrative and would recommend. The story again with all the twists and turns were really interesting and I love how Rebus interacts or maybe better to say does not interact with others. Highly recommended.

It does what it says on the can

If you could sum up Saints of the Shadow Bible in three words, what would they be?

What does James MacPherson bring to the story that you wouldn’t experience if you had only read the book?

He is Rebus! James who?

Gripping throughout. Sympathy with the character, Rebus, is as strong as ever and we are behind him ever step of the way. The crime and it solution is almost incidental, interesting though it is. I could and did listen to this on its own.

Malcolm Fox and John Rebus working together, after a fashion. A good mix of old and new policing with the usual Rebus mix of the two. The narration is excellent with a good distinction between Rebus and Fox. However, I would recommend that if you haven't already read both the previous Rebus stories and the Fox ones then it would be worth doing to get the full enjoyment from the book.

Back to Rankin excellence

I found that the Rebus series was dropping a bit in my estimation, but this book is back on top form. Fox and Rebus both feature strongly in this novel and that worked very well.

The storyline was good and the tension up to standard. There is a new dynamic between Rebus, Fox and Clarke and I found it believable and really well thought out.

A shadow of the best of Rankin

No. No mystery that I cared too much about and certainly no excitement in this novel.

If you’ve listened to books by Ian Rankin before, how does this one compare?

This book doesn't compare well. A bit of a thin story line and no characters that I really cared about one way or the other.

Who might you have cast as narrator instead of James MacPherson?

Sean Barrett or Steven Pacey or anyone who can render a range of voices. Unfortunately....very unfortunately...James MacPherson wasn't able to vary his voice sufficiently for me to always tell who was speaking. The author doesn't always provide the name of the speaker either so at times this was very confusing.

This could almost put me off another Rankin/Rebus novel but it won't.