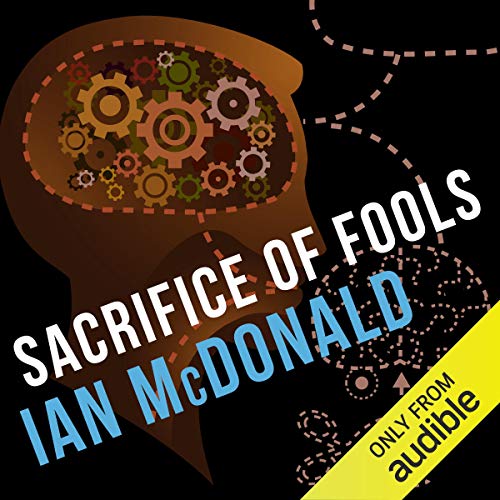 Protestants, Catholics, aliens... Just another division in Belfast. When the alien Shian come to Earth, they offer technology in exchange for a home. Belfast, Northern Ireland, is where eighty thousand of them settle. From that point on, the already-divided city takes on yet another partition. The Shian integrate themselves into the city’s culture, becoming one more set of faces in the crowd.

Now, a series of ghastly murders has stunned the city and affected both the Shian and the humans. Andy Gillespie, a Loyalist and former criminal, is immediately named the main suspect in the killings. To clear his name, he must find the true perpetrators, and in order to do so, he must get help from any source possible—be it Protestant, Catholic, or extraterrestrial.Shortlisted for the James Tiptree Jr. Award, Sacrifice of Fools depicts a city at once familiar and peculiar.

Belfast resident Ian McDonald’s interpretation of his hometown is one in which the people live their lives to the best of their abilities; one in which they have to deal with the basics of life with extraterrestrials, from language barriers to surprising new fetishes. Here, Belfastians discover how little things truly change.

What listeners say about Sacrifice of Fools

Ian McDonald grew up in Belfast, a city known for the turmoil and unrest it has endured because of the conflict between Catholics and Protestants. Some of McDonald’s novels allegorically explore the causes and results of a divided city. In Sacrifice of Fools, McDonald presents a vivid and lively conflicted Belfast, and then he throws a third element into the mix: aliens.

The Shian are a peaceful alien species who, upon arrival on Earth, are allowed to settle in Belfast in exchange for sharing the secrets of their technological superiority. The Shian are humanoid in appearance, but have enough biological differences that they cannot successfully mate with humans. They also have very different languages, laws, culture, and customs. While their similarities make them attractive to many humans (and weird fetishes evolve), the differences cause misunderstandings and culture clashes.

The Shian Welcome Center is manned by Andy Gillespie, a human (Protestant) ex-con who knows more about the Shian than almost any other human because of something that happened to him while he was in prison. Andy is able to understand much, but not all, of the Shian language, so he can help them transition to life on Earth and to navigate through the oddities of human civilization. Especially Belfast.
When some of the Shian are murdered at the Welcome Center, Andy, who has a felony on his record, is the prime suspect. If Andy doesn’t figure out who the actual culprit is, not only is his personal freedom at stake, but so is the peace of his city and, in fact, the world. As he investigates he is joined by a Shian lawyer and followed by police detective Dunbar, a (Catholic) woman who has her own personal struggles and prejudices to deal with.

Once again Ian McDonald gives us a fascinating what-if scenario set in a familiar city that has become almost unrecognizable due to the influence of advanced technology and, in this case, an influx of aliens. As the humans try to understand their new alien neighbors, the Shian, in turn, try to understand Belfast and the humans who live there. This is not an easy thing to do since even Belfast’s human citizens have trouble understanding and getting along with each other.

Sacrifice of Fools is a murder mystery that has a lot to say about language, dreaming, psychology, eugenics, gender, sexuality and genetics. Children play a major role in the story. They’re not point-of-view characters, but they’re often in the background and the three main characters’ actions are affected by the children they are responsible for. This is perhaps a metaphor that represents the entire story (I need to be vague here so as not to spoil the mystery), but I’m not sure if McDonald actually intended that.

Sacrifice of Fools is often violent, gruesome and ugly. It’s disturbing in so many ways which, of course, is exactly how Ian McDonald wants it to be. I listened to the audio version produced by Audible Studios. It’s narrated by English actor Sean Barrett who sounds (at least to this American) like he was born and raised in Belfast. He’s brilliant. If you’re going to read Sacrifice of Fools, I definitely recommend the audio version.

I read, and loved, this book years ago. The premise of the story is simple = an alien colony ship has landed on earth. How would that work out in the divided society that is northern Ireland?
I thoroughly enjoyed the audio book. The narrator is excellent.