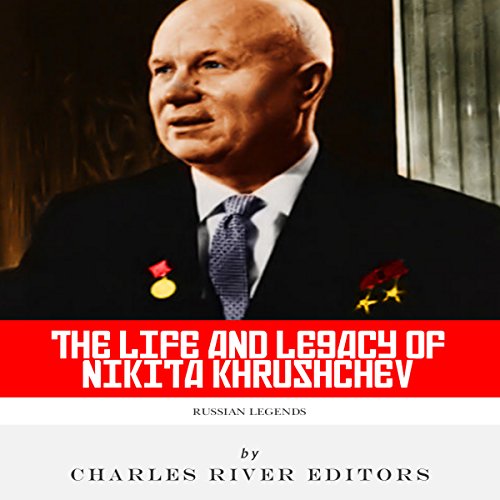 Russian Legends: The Life and Legacy of Nikita Khrushchev

A lot of ink has been spilled covering the lives of history's most influential figures, but how much of the forest is lost for the trees? In Charles River Editors' Russian Legends series, listeners can get caught up to speed on the lives of Russia's most important men and women in the time it takes to finish a commute, while learning interesting facts long forgotten or never known.

For 30 years, much of the West looked on with disdain as the Bolsheviks took power in Russia and created and consolidated the Soviet Union. As bad as Vladimir Lenin seemed in the early 20th century, Joseph Stalin was so much worse that Churchill later remarked of Lenin, "Their worst misfortune was his birth ... their next worst his death."

Before World War II, Stalin consolidated his position by frequently purging party leaders (most famously Leon Trotsky) and Red Army leaders, executing hundreds of thousands of people at the least. And in one of history's greatest textbook examples of the idea that the enemy of my enemy is my friend, Stalin's Soviet Union allied with Britain and the United States to defeat Hitler in Europe during World War II.

Stalin had ruled with an iron fist for nearly 30 years before his death in 1953, which may or may not have been murder, just as Stalin was preparing to conduct another purge. With his death, Soviet strongman and long-time Stalinist Nikita Khrushchev (1894-1971), who had managed to stay a step ahead of Stalin's purges if only because he participated in them, became the Soviet premier.

What listeners say about Russian Legends: The Life and Legacy of Nikita Khrushchev