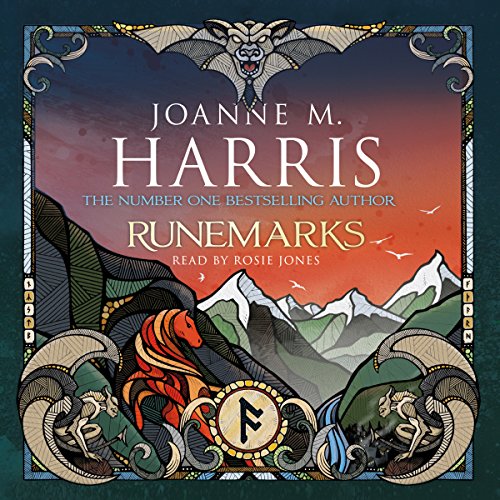 It's been 500 years since the end of the world and society has rebuilt itself anew. The old Norse gods are no longer revered. Their tales have been banned. Magic is outlawed, and a new religion - the Order - has taken its place.

In a remote valley in the north, 14-year-old Maddy Smith is shunned for the ruinmark on her hand - a sign associated with the Bad Old Days. But what the villagers don't know is that Maddy has skills. According to One-Eye, the secretive Outlander who is Maddy's only real friend, her ruinmark - or runemark, as he calls it - is a sign of Chaos blood, magical powers and gods know what else....

Now, as the Order moves further north, threatening all the worlds with conquest and cleansing, Maddy must finally learn the truth to some unanswered questions about herself, her parentage, and her powers.

From the bestselling author of Chocolat and The Gospel of Loki comes a fantastical tale of magic, adventure and Norse mythology.

Read by Rosie Jones, with a preface and prophecy read by Joanne Harris.

What listeners say about Runemarks

A great, fantastical, and epic tale

I really loved all the little references to popular culture: all the subtle and not so subtle references to texts such as the war of the worlds , lotr, got. This was a surprise from the author of Chocolat. The sideways jump from magic realism to fantasy was unexpected. But why should an author be limited by her past achievements in a particular genre?
I thought that this tale had more than a little similarity with the writing style of Neil Gaiman, but there are subtleties in this text I've never noticed in his work. Nonetheless, there is at least a homage here to his style of writing. This book, unlike Chocolat, is more insular and contained. I think this is because of the fantasy genre. References to Lands End cannot carry the broad cultural values and nuance of New York. Yet there are universal ideas that are unpacked in this novel. And, like all great works of fiction, there are themes and ideas running through the text that elevate it beyond a simple reiteration of a genre. I like the way that Christianity is associated with a nameless horror, bent on mindless conquest, throughout this text. I also liked the way that the story takes the old mythology of northern Europe and imagines that these myths have actual substance. This literary conceit is a really nice way to propel the narrative. I am, however, still scratching my head trying to work out why the old fortress on the hill had cannon in a pre-ragnarok context.
While this story was good, it has to be acknowledged that the narration by Rosie Jones was superb and made some of the duller sections of the text enjoyable to listen to. She brought the story to life and her voicing of characters was brilliant. Everytime she read Sugar's dialogue I laughed out loud. each character had a different timbre, accent and intonation and she was really consistent throughout the entire novel. It is a wonderful performance and her talent is really only rivalled by Stephen Fry. I hope to listen to more books narrated by her in the future.

Great story with great narration. Really interesting and modern spin on the old Nordic gods. Looking forward to the next book (if there is one). Suitable for younger people.

Loved the story and loved the reader!!!
Going to look for more books that she reads.

Where does Runemarks rank among all the audiobooks you’ve listened to so far?

Meet Maddy, a girl who does not fit into the way of life in her village, she thinks too much and dreams. Dreams are forbidden as is the use of magic for it is the power of chaos. That is what happens to her life that year as One-eye brings her a new challenge.

See the Norse Gods in ways you would never have imagined before. They are more real, more believable and very much amongst us. The characters wild and all of their own throughout. The story whilst slow to start is very much like a stone running down a hill and really does pick up speed. Whilst predictable with many a thing you can see before told you are still left in the dark about some of the deeper twists in Maddy's tale. A very very well written book that I am going to love reading more of the series.

This is the better version

Very entertaining till the end. Love this story. I used to own the abridged version and did not like it since there were lots of details missing which actually help paint the world where the main protagonist lives. I fully recommend this book if you enjoy stories that makes you see your world in a different light!

Just a bit drawn out

I liked the story, the narration and I do enjoy the way that JH writes, but this book just went on and on....... I lost interest in the minutiae and decided to flip through a few chapters, Overall I found the whole thing to be soporific and lost all sense of what was going on!

I think I would have enjoyed it so much more if it had been stripped of the overburdened 'wordiness' of it all.

A book of books already written.

Overall the story had some wonderful aspects and it was interesting how the use of the runes carried it along most elegantly. However, I could hear traces of the Lord of the Rings not written but they were there and other less known books but those that have read them will know. The narrator curiously has collected a range of voices from films i already know, so like old friends finding different words she ‘glamoured’ me. The ending poetry? was awful I couldn’t listen to it. Will I listen to a second one? I will let you know.

firstly, 8nlove this book in it's own right. it's a real page turner and a brilliant telling of Norse god's in a modern setting

however an even rarer find, it has a strong independent female protagonist with no romance side story. just great story telling

Good for target demographic I think

I like Joanne Harris’s books immensely and I know I’m not the target demographic for this one. But nonetheless it was enjoyable and I stayed with it to see what happens

This is such a colourful story. Joanne Harris is incredible how she weaves words to create such vivid pictures.

Rosie's talented accents made you feel there was a huge cast.
Absolutely fantastic book.Listen and you will be hooked. You will also see chaos and order all around you!

This was a battle to listen through!

I like Joanne Harris. Liked Holy Fools, liked Chocolat, but there was something not right about this, I struggled with the narration and the prose made me feel like I was listening to a book written for the 12-16 age group. I actually checked twice it wasn’t! I wasn’t fond of the modern turns of phrase used by the ancient gods as it made them seem 2 dimensional like they were literally just characters. Actually the whole book sounded like a fan fic and the poem at the end - who narrates that! God-awful - pun intended! I will refund this book as a totally lost cause. Concept was ok but it was disjointed and I didn’t enjoy it at all. If you want Norse gods, read Neil Gaimon.

Story trotted along engagingly enough and the main character was stoicly adventurous, but I couldn’t bear the narration. Almost every female voice was gratingly high pitched and petulant. Completely ruined it for me. There are other ways of female character differentiation than just varying degrees of squeakiness and sulk. Getting to the end felt like a feat of endurance, which is a shame because the plot was alright.

norse tales told in such colour

Cry I did, as did I laugh.
some of the pronouced norse names I believe to be wrong, however this is a minor issue, for the story is a wonderful adventure, twice I have read and now I have listened. Very good voices, though I find it difficult to imagine the norse gods with welsh and scottish accents. still enjoyed it.