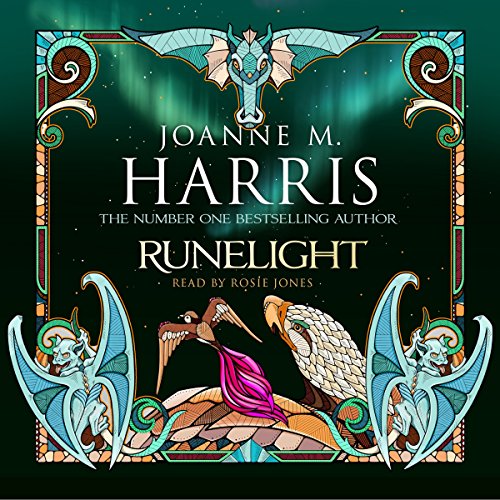 The next gripping tale of magic, adventure and Norse mythology from the Sunday Times best-selling author of Chocolat and The Gospel of Loki.

The squabbling Norse gods and goddesses of Runemarks are back! And there's a feisty new heroine on the scene: Maggie, a girl the same age as Maddy but brought up a world apart - literally in World's End, the focus of the Order in which Maddy was raised. Now the Order is destroyed, and Chaos is filling the vacuum left behind...and is breaching the everyday world.

Six hundred miles apart, two girls both bear on their skin a runemark: a symbol of the Old Days when the known Worlds were ruled by the gods from their sky citadel, Asgard. Now Asgard lies in ruins, and the power of the gods has long since been destroyed. Or so everyone thinks. But nothing is lost forever, and the gods haven't given up yet (nor stopped squabbling!), and they want the power of the runes borne by Maddy and Maggie - these new runes, which carry huge potential, their runelight shining out as a portent to the future. Soon both girls are swept into a maelstrom of cataclysmic events that are to draw them closer and closer to each other and nearer and nearer to a horrific struggle where each must prove where her loyalty lies....

Filled with inventive and humorous detail, trickery and treachery, carnage and lunacy, Runelight is the second title - following Runemarks - in a series of gloriously imaginative and dramatic tales about the Norse gods.

What listeners say about Runelight

First, I have to comment on the narration by Rosie Jones. She is superb. Her performance is outstanding - better than perfect. The way she brings each character to life is remarkable. She is able to take this cross cultural, cross-textual literary endeavour and actually extend it, just with the quality of her reading. But there also needs to be grist for the mill. Harris has written two wonderful books in this series. It doesn't matter that they are aimed at younger readers; it doesn't matter that there is a strong post-feminist and post structural undergirding for these novels. The books and the narratives stand alone and can be enjoyed by any one at any age. They're just really enjoyable stories. But the books do speak to a younger audience. Both my girls (9 and 10) love these books. The centralisation of the female characters go a long way towards this. Sadly, this is not typical of literature in general and certainly not in the fantasy genre. Even Ursula LeGuin had male central characters in her novels. So Harris is changing the world here, as she says, one book at a time. The anachronistic elements in Runemarks are extended in Runelight. And an older reader might find these challenging. But if you suspend your disbelief just a half a turn more than usual, these become very funny. The wolf brothers, for example, are typically teenage males, obsessed with skulls and black shirts and absolutely mystified by females of any age or description; except of course for their outrageously heeled punk-haired fae/witch mother, whom they adore and who encourages their voracious appetite for destruction and 'vagabondism'. All in all, this is an excellent audiobook to have in your library and I highly recommend that anybody who likes a good tale, wonderfully read, to buy this audiobook. I don't think you'll be disappointed.

What an amazing journey through the worlds.
Such intriguing characters. The colour shines through in perfect descriptions. I felt as though I was there with them. Perfect lockdown escapism .

Such a good book!

Such a adventure story this book is a bit different to runemarks it has got a bit of romance which makes it that bit more interesting. Brilliant story with lots of amazing words I so wish I had a strong glam like Maddie and maggie . Again such a great story really to understand
Joanne should write another runemarks/ runelight book there just so interesting and amazing and easy to understand