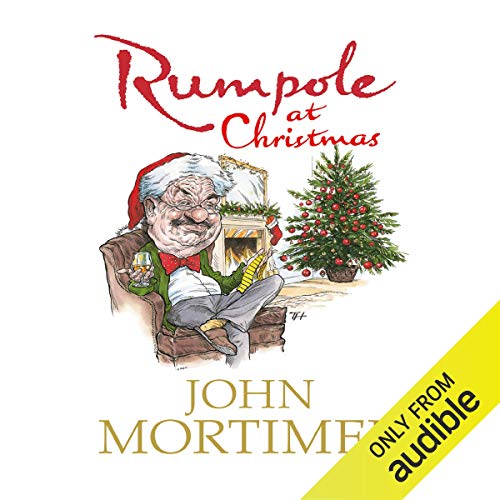 Rumpole isn't particularly fond of Christmas; he finds it has a horrible habit of dragging on as he and She Who Must Be Obeyed go through the usual rituals in Froxbury Mansions.

After the exchange of presents (lavender water for her, a tie for him) they settle down to a supermarket turkey with all the trimmings, followed by a glass of port. The only excitement comes in deciding whether to stand for the national anthem after the Queen's Speech.

But at least the criminal fraternity rarely takes a holiday, so over the years Rumpole has found his festive celebrations disturbed in the most welcome ways. Whether it's a Father Christmas who behaves suspiciously at Equity Court's Christmas party, or a high-profile murder trial that comes up at the Bailey just before the holiday season, or a body discovered at the health spa where Rumpole is gloomily trying to survive a not-so-festive Christmas diet of yak's milk and spinach, there's always something wonderfully unlawful to liven up the dull holiday plans.

When Sir John Mortimer died in early 2009, it was widely agreed that Horace Rumpole was his greatest fictional creation. In these seven delightful stories, read by Bill Wallis and collected together for the first time, the great barrister lives on.

What listeners say about Rumpole at Christmas

Rumpole at his Best

And a Grouchy Christmas to You!

I'm a recent fan of "Grumpole", having just discovered him for myself a week ago, with the first book in the series, "Rumpole of the Bailey", with Patrick Tull narrating on the version I listened to. I thought no one else could possibly do Rumpole quite as briliantly as Tull did, but must say I enjoyed Bill Wallis's performance as the hapless yet sympathetic barrister tremendously. Rumpole is no great fan of the Christmas season, which every year brings him a new tie from She Who Must Be Obeyed and a bottle of lavender water to this unbending wife, who drags him from one Christmas engagement he can little look forward to, to yet another worse engagement, with the finale being a stay at a "health farm" where the best he can hope for finally happens: a murder suspect to defend to take him away from insipid health food and miserable company. A very entertaining holiday read that I'll be sure to return to regularly during the Christmas season.

Rumpole at Christmas isn't great literature - it's definitely on the lighter side of fiction. But it's easy to become tired of humorless and bleakly-introspective stories that have unfortunately become the norm in short fiction. So it is nice (especially around the holidays) to tuck in to this collection of crisp, funny and, if predictable - at least comfortably so - short stories.

One note on the production: The sound (at least on my copy) was muddier and harder to hear than I would have expected. I wonder if Audible could fix this. In any case, it's probably best listened to in the highest format your device will support.

Rumpole and his dry wit are back at it again in this collection of
short tales centered around Rumpole's Christmas holidays away from the courts. Of course, his wife, Hilda--or 'She Who Must Be Obeyed' is always present. The stories include the annual socks and tie present for Rumpole, and the bottle of lavender water for Hilda.

Each different vacation finds a mystery for Rumpole to solve. He also has remembrances of pre holiday cases with Judge Grave'stone', who offhandedly barks his views from the bench. The logic and humor, combined with some modern day issues, continues to be a high point in Mortimer's writing!

Wallis is almost as good as Leo McKern. Highly recommended. Listen to the entire set.

A good variety of short stories. Enjoyed each of them, but they are not in chronological order.

Everything you could want a reading of a Rumpole to be!! Narrator totally matched my imagined Rumpole and makes the text even more enjoyable!! Hard not to really like the irascible barrister and his take on daily events.

Not much about Xmas, but I liked it anyway

I'd forgotten how much I liked the Rumpole series. Xmas isn't really a part of these stories, but I enjoyed them nonetheless.

the title sums this up perfectly

Was Rumpole at Christmas worth the listening time?

all seven of these holiday stories were very enjoyable, and bill wallis gives such a flawless performance as rumpole, i kept forgetting i was not listening to the late great leo mckern! my one very small negative comment is that, since these tales all came from different collections and were never intended to be read (or listened to) back-to-back, there is a certain amount of repetition in the descriptions of "she who must be obeyed", the various characters at one equity court, and the holiday revels at froxbury mansions. i suggest sampling these one at a time, over a few december evenings, for maximum enjoyment.

Ok collection of short Rumpole stories with a Xmas theme

I have just listened to all the Rumpole books so am Disappointed that the first story is a repeat of one included in an earlier book. Otherwise an OK if short Rumpole collection