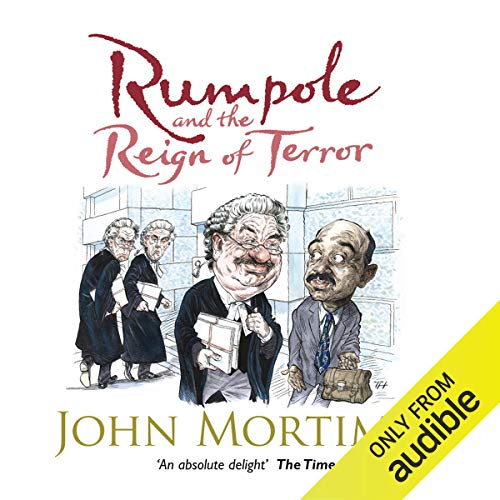 Rumpole and the Reign of Terror

Rumpole and the Reign of Terror

In the dark days of the war on terror, only one man can be counted on to fight injustice, defend the innocent, and insist on a fair and decent trial for all, contrary to New Labour's new anti-terrorism laws. Rumpole's wig may be yellowing at the roots, his gown might be in tatters, but the oldest inhabitant of 4 Equity Court has no use for the word 'retirement'.

There's the larcenous Timson family to defend, suicide bombers to dodge, Pommeroy's Wine Bar to frequent, and the financing of the Rumpole household - with Hilda's indulgence in luxury cleaning products - to look after. But when the beautiful Tiffany Timson's husband is arrested on suspicion of terrorism, Rumpole prepares to drop everything and take on his biggest challenge yet.

Horrified to learn that the accused doesn't even know what he's charged with, he determines to insist upon a fair trial for the Pakistani doctor. But battling against the new legislation, and the slippery Home Secretary, proves a tricky task. And when She Who Must Be Obeyed starts locking herself in the box room, 'minding her own business', Rumpole finds himself losing the plot, clueless about the goings on, even in his own mansion flat. Is the Anglophile doctor really an Al Qaeda agent? Will Rumpole discover Hilda's secret before it's too late? Will the Timson family ever forgive him for defending a 'terrorist'?

If you are not a real Rumpole fan skip this one. The audio quality is not good which spoils it for me.
The story is not quite up to par for Rumpole also.

rumpole is a great series and we'll worth a listen, this book included. listen to them in order for the best results.

I love this Book!

This is my fave thus far! And I've been reading Rumpole for years! Hilda needs her own book too!

Reign is one of Mortimer's best Rumpole stories. And Bill Wallis is brilliant as always.

She Who Must Be Obeyed Strikes Back!

Hilda starts writing her memoirs and commands a portion of this very well done statement on the effect of fear of terrorism on the British judicial system.
"The person who is willing to trade freedom for security deserves neither." Ben Franklin

Skip this one until they remaster the audio, which sounds like it was recorded through a cardboard tube in an empty garage.

A combination of bad audio quality and Bill Wallis's performance makes this recording very hard to understand. Wallis is a good actor, and he characterises Hilda, Dr Khan and the Timsons well, but his Rumpole is given a fruity voice which makes him almost incomprehensible.

This is a later book, written after the TV series had finished, so Mortimer was able to take liberties with some long-running characters. Many people feel that the series jumped the shark, and that Mortimer should have left it where it was, but I disagree. The later stories are always interesting, sometimes moving, and always convey Mortimer's ideas. His excellent prose and wit don't fade, either.

Yes, the Rumpoles, Dodo and the Mad Bull are all now about 103, in a world of "word processors" and unwelcome changes to the law. But like Hercule Poirot, they are frozen at the age of about 65. And the human heart is eternally young.