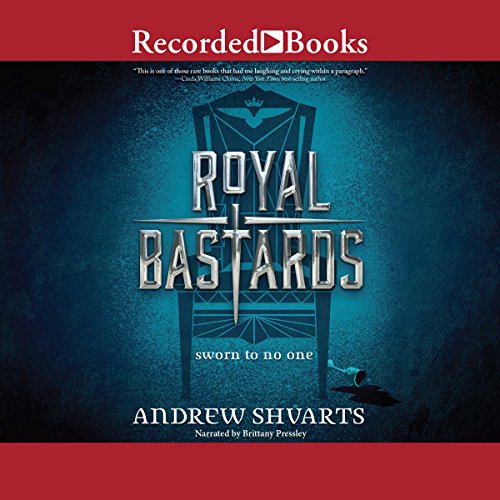 Being a bastard blows. Tilla would know. Her father, Lord Kent of the Western Province, loved her as a child but cast her aside as soon as he had trueborn children. At 16 Tilla spends her days exploring long-forgotten tunnels beneath the castle with her stablehand half brother, Jax, and her nights drinking with the servants, passing out on Jax's floor while her castle bedroom collects dust. Tilla secretly longs to sit by her father's side, enjoying feasts with the rest of the family. Instead she sits with the other bastards, like Miles of House Hampstedt, an awkward scholar who's been in love with Tilla since they were children.

Then, at a feast honoring the visiting princess Lyriana, the royal shocks everyone by choosing to sit at the Bastards' Table. Before she knows it, Tilla is leading the sheltered princess on a late-night escapade. Along with Jax, Miles, and fellow bastard Zell, a Zitochi warrior from the north, they stumble upon a crime they were never meant to witness. Rebellion is brewing in the west, and a brutal coup leaves Lyriana's uncle, the Royal Archmagus, dead - with Lyriana next on the list. The group flees for their lives, relentlessly pursued by murderous mercenaries; their own parents have put a price on their heads to prevent the king and his powerful Royal Mages from discovering their treachery. The bastards band together, realizing they alone have the power to prevent a civil war that will tear their kingdom apart - if they can warn the king in time. And if they can survive the journey.

What listeners say about Royal Bastards

This book had a lot of promise, and I feel like it mostly delivered on it. I had a hard time connecting with some of the characters, but not the one who died. I bawled. Blast it all! I really enjoyed the flow of the story and the way things unfolded, and the interactions with the characters. The twist near the end was not exactly surprising, but I feel that if it had NOT happened, it would have ruined the story. It NEEDED to happen, you know?

The flow was quite good, the pace generally edge-of-your-seat. Quite done, in my humble opinion.

The narrator was good as well, helping to intensify scenes where needed, but a tad lacking in the emotion department for such events. Still, quite good, and I enjoyed her voice.

If you enjoy high fantasy (I think that's it, I'm not great with genres!), then you will probably enjoy this.

Faced paced action fantasy from beginning to end. There are giant monsters to escape from, sadistic mercenaries to flee from, twisted power-hungry lords and ladies deploying whole armies after them and this motley group of bastards on the run to save their own lives and that of the princess among them.

Plenty of plot twists, murder and backstabbing to keep things interesting and a bit of romance thrown in there too. The lead character, Tilla, is a likeable strong female protagonist. She must decide between the loyalty she feels to her new found friends and the loyalty she feels to her father and her lifelong yearning for his love and approval. The other main characters were a little stereotypical for my liking, but I grew to like them none the less.

This is the first full audiobook I’ve ever listened to, and the narration was great, however I gave that part four stars instead of five because I found some of the accents and voices off-putting. The princess sounded like a cartoon care bear from the 80’s, which made me visualise an annoying airhead (which, granted, she is depicted to be at the beginning of the story), and the spunky warrior was given an irritating fake accent. In my own head, if I were the one reading the book, they’d have sounded completely different.

The story reads like a YA, although I’m not sure of the actual classification. It’s very violent and includes an intimate love scene, but these are way tamer than in some other YA books I’ve read.

Absolutely loved it, and I can’t wait to move on to the city of bastards next.

I read this book before so I knew what I was going into when I started listening to it and I must say that the performance of the reader was pretty great, the story is amazing and left me with soooo many mixed emotions and wanting answers for many parts of the plot. I am completely sold on this universe and eagerly waiting to start book 2.

Would have been a good stand alone

I actually really liked the story of this book, and it basically comes down to this as to why I three starred this book. LIGHT SPOILERS AHEAD


All the way up until the end of the book the Main Character does not want another Great War and when it becomes unavoidable after everything that happens to her, her friends, and her family SHE DOESN'T CARE WHO WINS THE WAR!!! She has everything she wanted, it would take a Dues Ex Machina for her to car about the war. The book ends with all knots that she cared about tied..... so why should I? Sorry but I don’t care for series that could literally end with the first book.

Reading is not the same as the physical copy

I loved this story and the performance was great the readers were clear and concise with her words, however, if you read along with the physical book as I do then you will notice that the reader or maybe the copy she is reading is different than the physical copy you buy in stores. There are whole sentences that she adds and there are words that are changed. It doesn't change the story or destroy anything but it was rather annoying.

Otherwise this was a great listen and I highly recommend this story.

A great start to a new series

This was a really good book that I thoroughly enjoyed through and through. It takes you through the unlikely story of the Kings royal bastards and kind of involves you in that community of all these other clan bastards that you wouldn't normally see and that you rarely hear about as listeners. The story kind of set me in mind of the TV show Vikings and I kind of felt like it unfolded under that landscape and background. It was also surprising to kind of be swept away by someone zombies in here as well remind me also if The Walking Dead. Can't wait for the next book in this series!

Well, they are Bastards!

Ok, I liked it and I want to know what happens next. The romance between Tilla and Zell was great. I loved it. I hate what happened to Jax. And I'd like to ring the neck of that DILLUSIONAL Miles. He irritated me the ENTIRE story.

Love love love exciting and well written! I can not wait for the next book!

The narrator. Her voice was good in the beginning, but i don't know if she got sick, or what but her voice is more gravely after several chapters and it grates on you the entire rest of the book. I'm on chapter 19 of 30 and unsure if I'll continue.

I like Tilla, Zel, and Lyriana (for the most part) Tilla and Zel are fun characters and seeing the two slowly warm up to each other has been enjoyable! I like Lyriana when she's not being preachy about her beliefs.

Her voice. I liked it in the begging but it changed several chapters in due to whatever circumstance, unfortunately it made the story hard to enjoy after that. Am hopeful it'll go back to normal ASAP!

Could you see Royal Bastards being made into a movie or a TV series? Who should the stars be?

Sure. I have enjoyed the story so far, minus one character I wish would just die, or go away because of how annoying and whiny he is. Not sure who I'd "cast" if i could choose.

I enjoyed it. I would have preferred bigger fight scenes with more magic used. Good narrator.

If you could sum up Royal Bastards in three words, what would they be?

What was one of the most memorable moments of Royal Bastards?

There were a number of surprising twists and moments in this book. Some were heart breaking while others were really funny.

Have you listened to any of Brittany Pressley’s other performances? How does this one compare?

I loved the narrators voice and will be listening out for more audiobooks with her reading them.

I was tempted to listen even not in my dedicated listening times.

I highly recommend this book and am looking forward to the next one.

This was my first audio book and wow. I loved it. fantastic story. fantastic narrator