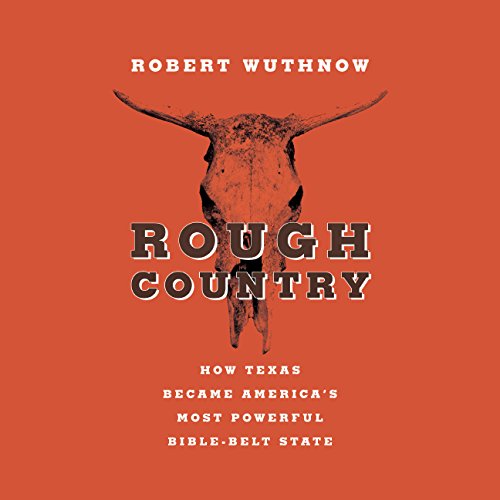 Tracing the intersection of religion, race, and power in Texas from Reconstruction through the rise of the Religious Right and the failed presidential bid of Governor Rick Perry, Rough Country illuminates American history since the Civil War in new ways, demonstrating that Texas' story is also America’s. In particular, Robert Wuthnow shows how distinctions between "us" and "them" are perpetuated and why they are so often shaped by religion and politics. Early settlers called Texas a rough country. Surviving there necessitated defining evil, fighting it, and building institutions in the hope of advancing civilization. Religion played a decisive role. Today, more evangelical Protestants live in Texas than in any other state. They have influenced every presidential election for 50 years, mobilized powerful efforts against abortion and same-sex marriage, and been a driving force in the Tea Party movement. And religion has always been complicated by race and ethnicity.

Drawing from memoirs, newspapers, oral history, voting records, and surveys, Rough Country tells the stories of ordinary men and women who struggled with the conditions they faced, conformed to the customs they knew, and on occasion emerged as powerful national leaders. We see the lasting imprint of slavery, public executions, Jim Crow segregation, and resentment against the federal government. We also observe courageous efforts to care for the sick, combat lynching, provide for the poor, welcome new immigrants, and uphold liberty of conscience. A monumental and magisterial history, Rough Country is as much about the rest of America as it is about Texas.

What listeners say about Rough Country

I am grateful that this book was written and also that it was recorded on audible. Having moved to Texas 2 years ago, its these insights into the state, its history and culture that I was looking for. Extensively researched, this scholarly book aims to be such the authority on the subject that sometimes the detail he goes into can be excruciating. A hard listen at times, it worked well for me running in my car over the course of a couple of weeks. Lynching after lynching recounted can be harrowing, but that is the real history recounted with honesty. The educational and family background of every minor character can be a little tiring when you want the narrative to move on. That said, if you want the valuable insights into Texas, its conservatism and its Christianity, this is what you are looking for.