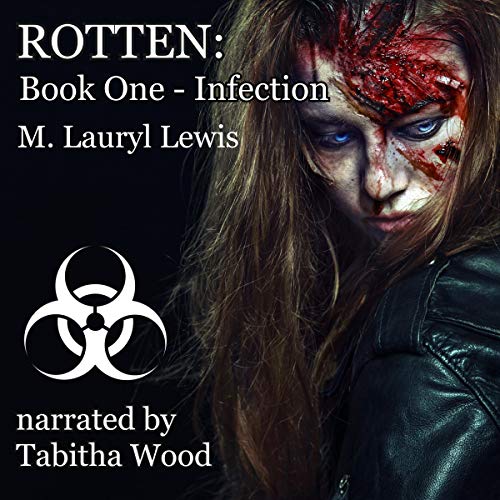 The undead. The reanimated. Monsters that walk the earth once Hell is full. Zombies. Call them what you want. No one was prepared for the end of the world to bring the impossible; the dead were never actually supposed to rise. War, plague, natural disaster maybe - but the dead rising to eat the living? That was never supposed to become reality.

It began with sniffles, coughs, and fever. Once sick, the end came soon, but so did the beginning. Just as quickly as the sick begin to fall, so does Poppy’s world. As she loses everything she holds dear, she faces her new world head-on. Accompanied by strangers, she tries to make her way to safety, soon to realize that safety no longer exists.

Rotten takes place in the same universe as the Grace series. Get ready to follow Poppy and Ellis as they cross paths with a few names you might recognize. While the two series will eventually merge, you do not need to know one to follow the other.

What listeners say about Rotten: Book One - Infection

Was so annoying she constantly asked the dumbest questions. When she needed run she would sometimes just stand in shock.. really?!
Other than that it’s good zombie apocalypse story .

I have never listened to any of the author's previous books. So I'm coming into this zombie world blind. The description that made me purchase this audiobook, leads one to believe that there's an outbreak, hell opens, etc. There was very little in regards to an outbreak. One person got sick at the store, dropped dead and the girls left the scene. That was all the time that was spent on the initial outbreak. As the girls leave the store, they get into a car crash, where the main character bashes her head. This is very very early in the book, maybe the first 30 minutes, if not sooner. Then you have the "damsel in distress" story line that continues throughout the book, or at least until hour 5, where I could take no more. Later in the same day, she twists her ankle and is practically helpless yet again, in need of a love interest of the opposite sex to save her. Blah blah blah. Oh, did I mention that the main character is also 18? A helpless 18 year old, damsel in distress, main character that requires a man/boy to save her is just not my cup of tea. As I mentioned above, at the 5 hour mark, during a heavy teenage make out session, is where I called it quits.