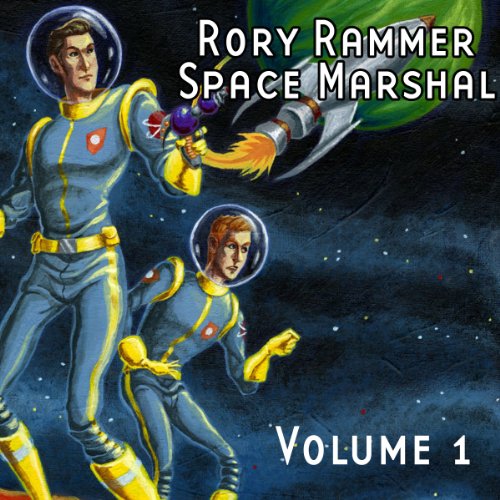 Fans of '50s-flavored space adventure series are in for a treat with the Atlanta Radio Theatre Company's production of Rory Rammer. David Benedict plays the steely Rory and Jack Mayfield his ever-eager sidekick "Skip" Sagan in these five episodes, which feature the duo battling space pirates, alien vampires, asteroid miners, deranged geneticists, and television production companies. This is a cast that clearly knows how to have fun, and the sparkling soundscape - complete with period-appropriate music - makes the whole performance sound like a comic strip come to life. If you loved listening to Sputnik-era radio dramas after school (or wish you'd been alive to do so) this is the show for you.

Come away with us now to the far off future days of AD 1985, after men have landed on the moon! When Space Marshal Rory Rammer, and his sidekick, "Skip" Sagan, guard the rule of law and the rights of the innocent from the skies of Earth to the orbit of the moon!

A longtime fan favorite series comes to audio with five thrilling episodes. Hear our intrepid Marshal and his eager young Cadet as they navigate the inner solar system in their rocket ship, the Silver Star, matching wits with space pirates, a mad French scientist, a bloodsucking alien from beyond our galaxy, an asteroid miner, and...a television production company. This is a multi-cast, fully soundscaped production of immersive audio drama.

What made the experience of listening to Rory Rammer, Space Marshal, Volume 1 (Dramatized) the most enjoyable?

The character actors/voices. Added to the experience as compared to single narrator.

There are five 10 to 15 minute episodes, so perfect for a short drive. They could've been listened to in one sitting just as well.

Better than campy, being old-school style radio drama with better than corny humor that made me smile--and a good dose of subtle humor which occurred regularly.

The plots weren't predictable and were good fun.