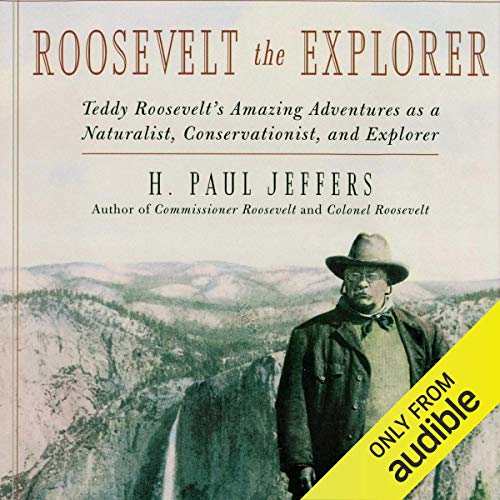 No American president has been more enthusiastic in appreciating the wilderness and in conserving our nation’s natural treasures than Theodore Roosevelt (1858-1919). And no other president wrote more about nature and his explorations of it than T. R., in scattered books, such as African Wilderness, and in his countless letters, including those collected in The Selected Letters of Theodore Roosevelt). Roosevelt the Explorer, by historian and Roosevelt biographer H. Paul Jeffers, is the only book to offer a comprehensive, lifelong chronicle of the consummate adventurer’s exploits and expeditions, which compelled him to traverse some of our planet’s most difficult terrains. Within these lively pages, Roosevelt collects more than 100 bird specimens in Egypt at age 14; hunts grizzlies and other game in the wilds of the Dakota territory; founds the Boon and Crockett Club, the nation’s first conservation group; and inspires the first Teddy Bear. Jeffers describes T. R.’s efforts as president, against fierce opposition, to establish an unprecedented system of national parks and to ensure the safety of America’s vast federal forests and wetlands from rampant development. In the words of Roosevelt himself, the adventures unfold T. R.’s 1909-1910, 11-month, Smithsonian-inspired safari across Africa, from Mombasa on the Indian Ocean to Khartoum in Egypt, which followed his two terms as president; and his 1913-1914 danger-drenched expedition to map South America’s 950-mile River of Doubt (a previously unexplored tributary to the Amazon River later renamed Rio Roosevelt in his honor). During the trip, one man drowned, another was murdered, and the culprit went insane, fleeing into the jungle. Roosevelt was lucky to escape alive, nearly drowning and plagued by jungle fever, dysentery, an ulcerated leg, blood poisoning, and malaria.

What listeners say about Roosevelt the Explorer

Quite a Story. Quite a Man

Narrator lacks emotion and voice inflection. Cannot continue due to borish and dry delivery.
Story can be exciting but....

this is an outstanding account of the adventures, and explorations of a great man. at times it felt as though I was listening to the bull moose himself.

We need more men like Teddy in our world today. Great admiration for the Man.