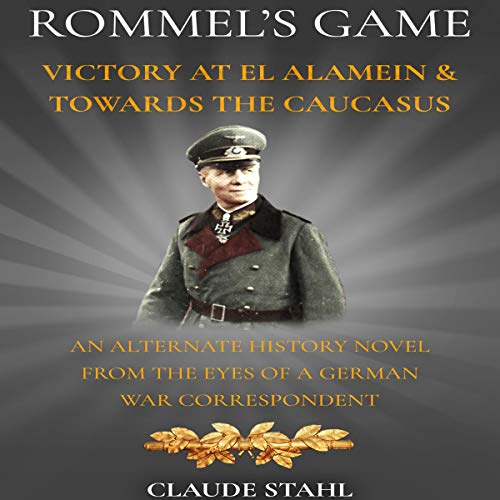 Rommel's Game: Victory at El Alamein & Towards the Caucasus

This exciting and thought provoking alternative history is observed through the eyes of a young German war correspondent.

With Rommel at its heart, the audiobook chronicles many details of German war culture and places, describing military and civilian affairs in Nazi Germany during and after the war.

The setting is 10 years after Germanys partial 1943 victory and its subsequent reconciliation with its former enemies when Joseph the German war correspondent meets with Cliff his American counterpart and old friend to describe his own, first-hand account of how the road to Germanys victory began with Rommel and his success in North Africa.

The audiobook chronicles several real life battles in North Africa and the Mediterranean, and the Desert Fox’s subsequent push north towards the Russian Caucasus. It also provides a unique insight into life in Germany beyond the victory parade, including a personal invitation from Dr. Goebbels and details of a murderous plot against the Führer, the plot that prevented Rommel to play the ultimate role and one that would change the Third Reich forever.

Rommel's Game: Victory at El Alamein & Towards the Caucasus is an exciting fantasy novel that offers a compelling alternative history, whilst maintaining the important facts. World War II enthusiasts will be mesmerized at what could have been diving into Rommel's campaign in North Africa, Malta, Syria, and Russia, and his critical role in forever changing the course of world history.

What listeners say about Rommel's Game: Victory at El Alamein & Towards the Caucasus