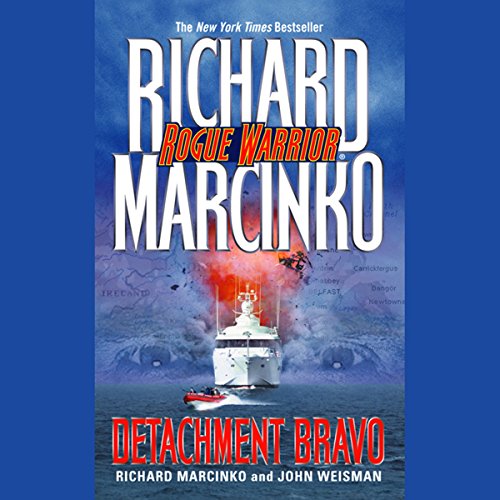 In Echo Platoon, the Rogue Warrior blazed of vengeance across the Middle East. In Operation Delta, he took out a German super-terrorist armed with stolen nukes. Now, the New York Times best selling SEAL commando of eight explosive thrillers must pay for his success. The price: exile inside the lethal world of Irish Republican Army terrorists - the battle no one else will touch.

Relegated to head up a special op organization made up of Brits, SEALS, spies, and NSA operatives, the Rogue Warrior is on the hunt for a high-tech hired army launched by two self-financed, new-generation terrorists. This murderous wing of the IRA is waging its own vicious little war - smashing the Good Friday Peace Accord and killing a half dozen American and British CEOs. Refusing to be contained to Irish turf, their next planned assault promises to stun the world. Marcinko and his merry band are determined to stop them, but there are a few unknowns: they don't know the target, they don't know the date, and they don't know where the terror is going down.

From top-secret diplomatic tunnels beneath London to the high seas off the Azores, Detachment Bravo is a fast-paced, furious, in-your-face adventure...just what the Rogue Warrior was made for.

What listeners say about Rogue Warrior

love it, couldn't put it down. very short story. possibly not worth the one credit/ $14.

Eat your heart out Jack Reacher, you got nothing on this bloodthirsty Sharkman! Kicking ass and taking names in the rawest possible way!! Best book I bought so far this year, will buy another for sure!!!

It's a Marcinko book alright!

The first Rogue Warrior book I ever heard / read was Red Cell - this was back when that book first came out (mid-90's) and it blew me away - the story, the action, the detail, the overall content. This book I didn't feel was quite as good, but still entertaining none the less.

If you like "special forces" or "navy seal" type stories, especially where the good guy looks to be stuck in a hard-spot and must take down the bad guy, give this one a whirl!

Audible - Please get the rest of Richard Marcinko's Rogue Warrior books, especially the first one, his auto-biography...these would be the top of my shopping list and definitely worth the effort to have available! :o)

I have read all of the 'Rogue Warrior's' books and have always imagined what his voice sounded like. I wasn't disappointed. Very compelling and fast paced story-line. I hope that the rest of his other books will be put on this site.

I want the 10 commandments

please get dick's other books! The rogue warriors success books are great! I would also like to be able to buy his auto biagraphy.

2 Thumbs Up for being Very Rouge-ish

I enjoyed this book thouroghly....Richard Marcinko takes you into the very mind of a Navy SEAL and tells it like it ought to be told. The life of a rogue and the job of protecting the free world from terrorism is dirty work but somebody has to do it. Thank the God of War that we had someone like Dirty-Dick and his rough-house rogues to get rid of the deserving "tangos" (For all you non-milpers types...that translates to targets!!) On a more personal note....a heartfelt thanks goes out to these members of SEAL Team 6. Hoooyahhh

Excellent book I have listened to over a 100 times. It is my 3 hours 9 minutes and 43 second timer for many things studied and practiced. Note: Wish Autobiography by said Author was narrated unabridged on Audible.

little short but a good story. I always enjoy the adventures as they are told.

A lot of roguish bravado, but it is narrated by Richard Marcinko. A legendary operator and leader in his elite community, Marcinko is truly a warrior of warriors. I thoroughly enjoyed his story and presentation.

what a great storyteller With every book Richard keeps us more and more on the edge of our seats.

colourful language - A book about rough people who do harm to others, so we can sleep soundly in our beds at night!