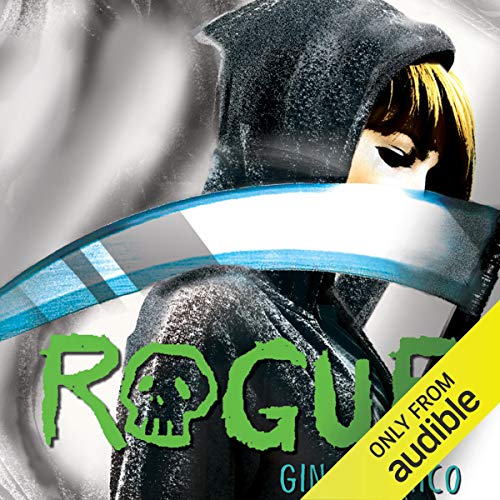 Editors Select, September 2013 - I’ve had an advanced reader’s copy of Rogue for quite some time, but I only read it recently as I was so reluctant to say goodbye to the world that Gina Damico created. The final book in her Croak trilogy took me on a roller coaster of emotions – all the way from laughing to uncontrollably sobbing. This remarkable ability to seamlessly infuse wit and sarcasm with such a grim subject matter truly sets Damico apart. In Rogue, we follow Lex, Uncle Mort, Driggs, and our other favorite grim reapers on their quest to save the Afterlife. While I won’t spoil who wins the war, I will encourage you to keep a tissue box nearby. Jessica Almasy, who did an incredible job bringing these characters to life and giving them each their own unique voice in Books 1 and 2, returns to narrate. —Katie, Audible Editor

Lex, a teenage Grim Reaper, has the power to damn souls - and it’s getting out of control. Her boyfriend, Driggs, is dead - sort of. She’s a fugitive, on the run from the maniacal new mayor of Croak and the townspeople who want to see her pay the price for her misdeeds.

Uncle Mort rounds up the Junior Grims to flee Croak once again, but this time they’re joined by Grotton, the most powerful Grim of all time. Their new mission is clear: Fix his mistakes, or the Afterlife will cease to exist, along with all the souls in it. The gang heads for Necropolis, the labyrinth-like capital city of the Grimsphere. There, they discover that the Grimsphere needs a reboot. To do that, the portals to the Afterlife must be destroyed...but even that may not be enough to fix the damage.

Things go from bad to worse, and when at last the fate of the afterlife and all the souls of the damned hang in the balance, it falls to Lex and her friends to make one final, impossible choice.

What listeners say about Rogue

I would recommend this to friends who like reading "teen" books - I am an adult in her 40's so it's not often I find a teen book that has a story I can get into.
This is a different take on grim reapers, so that made it quite enjoyable to read

Great end to a wonderful beginning. I was drawn in by the story and the narrator kept my attention and I finished the trilogy in the span of 2 weeks. I wish the story never ended but I enjoyed every second of it.

Barely made it through

This is not a good book. Honestly the last 6 chapters I had to listen to at 1.2x the normal speed, just so I could be done with it.
The previous 2 books had plot holes, like situations that were raised and then were never really returned to. It’s more the case in this book.

I think to be fair, I’m the wrong target audience for this book, and perhaps girls 12-18 or what I presume is the true target audience will way more easily gloss over these plot lines that seemingly go nowhere.

Something else that another reviewer on audible mentioned, is that there’s no real indication of time. At one point in time the character Driggs mentions that its’ only been 2 days since they left Croak, but you would have assumed its been at least a month or something.

The book focuses a lot on the city of Necropolis and the idea to incite rebellion and overthrow the President of the Grimsphere, for which Lex, Mort and their little entourage can then do what needs to be done and stop human involvement with the afterlife. However, it does it in a way that you just end up getting bored… there’s running this way, and that.. but all of it sounds almost pointless.

The morality as well in this book and this series is truly terrible. I won't go into it, because i don't want to release spoilers but, its really not great.

The narrator seems to be able to act Lex’s ‘turn on the tears, emotional outbreaks / fake remorse’ a little too well, and hence you end up really despising the main character.
Lex constantly behaves like a child, in terms of not asking what would seem to be important questions to ask. And even though her Uncle Mort appears to treat her like an adult at the start…. ends up still treating her like a child, like with-holding information from her that seems crucial to the overall plan, and then wondering why she’s acting like a child.
If you treat young adults like children they will behave like children. Treat them like an adult and there’s more chance they will act like it.

I wouldn’t be so surprised to learn that this book/ series was written by a 13 or 14 year old, and then polished up by an adult to make it more-or-less sensical and a little more grandiose than the original but not by someone that truly cared about the divergent plots lines and had the courage to tell the teenage author… ‘we’ve either got to cut these out, or make them lead somewhere’

Recommendation?
With so many amazing sci-fi/ fantasy books out there at the moment, it’s a shame to get one that is below average.
The series as a whole could be edited and combined into one book quite easily, and the 3-part distinction seems like a money grabbing ploy.
EG, 1 book that was heavily edited in terms of cutting out plot lines that go nowhere, re-writing characters so that they weren’t so annoying, and generally not meandering in the writing and assuming the reader won’t care…that would perhaps make the story well worth listening to for more than a very narrow target audience which I assume must not care about all these things to rate it 5 stars.
The whole moral of the story seems to be: being arrogant is bad, not communicating enough is bad, treating teenagers like children will ensure they act like children, doing terrible things is ok if you have friends that have unconditional love for you, and apparently ‘call you parents every so once in a while’.
Honestly, it’s decided…I’m returning this book. This did not meet the ‘Great listen guarantee’

I really loved this series. It was funny, well write, with a great story line. I would recommend the Croak series to anyone looking for good books to read!

What did you love best about Rogue?

Sacrifice for the greater good. Wow.

What was one of the most memorable moments of Rogue?

Oh every time Mort catches Lex and Driggs in the act. SO FUNNY!

The ending. Heartbreaking. Talk about selflessness.

How far would you go to right a wrong?

I am sooooo sad to see this series end. I really loved the town of Croak and Lex and the gang. I'll miss these Grims, I feel invested in them. That means Ms. Damico did her job right. I love that even though this was a quite heavy book, it still had those moments of humor which was desperately needed. I'm so glad I picked up the series. HIGHLY recommended.

Heartwrenchingly terrible, great - perfect and amazing. I swear to god if anyone ever tries to make this into a movie I will damn them, I will damn them right there on the spot. Oh wait, that wasn't the point... I'm sorry, I'm sorry. I can't help myself. This book, this trilogy, is exactly how it should be, Gina Damico you are brilliant.

This was one of the best series I've read! The overall story grips you straight away and before you know it you are whisked away into an amazing and mysterious other world just as Lex was. Every chapter was excellent and I highly recommend this series!

Satisfying enough conclusion to the trilogy

There were areas that where a bit irritating such as the high level of teen hormones and Uncle Mort's continued lack of explanation and preparation of his team where secrecy only served to be a detriment to their mission.
Overall, stillenjoyed this final novel in the trilogy.

This series has had me on my seat since listening to the preview. Jessica Almasy gives an amazing performance with all the quirks and sass that the bad ass character deserves. And Gina Daminco’s creative thoughts of death and after life to me we were provoking and original leaving more to be pondered. They were fantastic! A must read for anyone who wants a bite of the dark...

It is a good book to pass the time, the characters were interesting enough but the feeling I have after finishing it is that it didnt had any point the plot. Like it didnt have purpose. It is a saga just to hear/read once.

When I first started listening to this book I thought it was just an interesting premise, but it turned out to be a really jolly ride. The story is a unique take on grim reapers and the characters are surprisingly well developed. Jessica Almasy did a great job voicing the characters as well; it felt as though each voice had it's own character

I ended up listening to all 3 books in the series one after the other very quickly. Would definitely recommend.