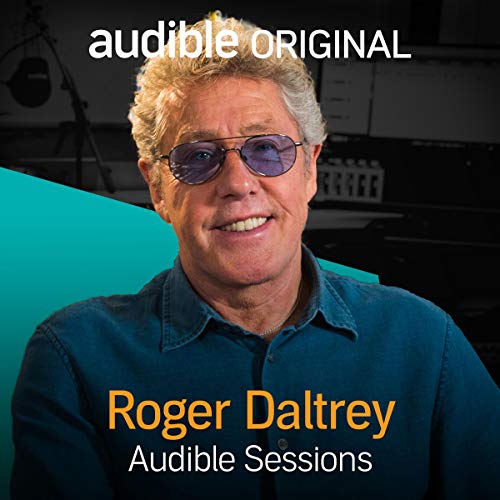 Joining us in the Audible Studios to talk about his autobiography, Roger Daltrey: Thanks a Lot Mr Kibblewhite, is British singer, actor and legendary front man of The Who, Roger Daltrey.

Coming to prominence in the mid-'60s as the founder and lead singer of rock band The Who, Roger Daltrey has had an iconic career spanning more than 50 years. Famed for his stage presence and powerful voice, Roger has also carved a solo career as well as an acting one. His memoir, Roger Daltrey: Thanks a Lot Mr. Kibblewhite, was published in October 2018.

Roger Daltrey talks to us about the time he was chucked out of The Who, making his own Fender guitar and discovering he had three more children after his 50th birthday.

What listeners say about Roger Daltrey

Roger, has a wonderful sense of humour. He is realistic, and intune with himself. Brilliant!

I enjoy the Who's music and I'm looking forward to listening to his book. I like how he kept the Who from doing drugs before concerts.

A fun interview. Roger is funny and Holly Newson does a good job. It made me want to get the book.

not what I thought it was

not happy I spent my credit on a 15 minute interview. Will look closer next time

I'd have a drink with this bloke

Who knew RD had such a sense of humor? I’m looking forward to reading his book- I found Townsend’s autobiography strangely dry and a bit suffocating. I’d like to see what the non-hard partying (at least with drugs) remaining half of the Who saw things back in the day.

What else can you say about an interview with Roger Daltry than that Daltry rock's.

I've heard Roger interviewed many, many times and this one is probably the best. He tells some great stories and his mood helped me appreciate his personal perspective on being the lead singer of "The Who"

Interesting for Who fans

This was an taster for his book. Interesting but not riveting even for the most ardent fan

Well worth a listen!

Mr Daltry, doesn't take himself or his fame, too seriously! As a result, he comes across as the sort of person who's ' good company for a pint! '

What can I tell you?? It lead me to ordering the biography courtesy of Audible Books!!

the interview with Roger Daltrey really piqued my curiosity and made me want to read his book.

I'm 24 and I love "The Who"". Not sure if I'm ready for another biography yet(I've just finished one) however, this is definitely high on the list when the time comes.

A short question and answer interview with the lead singer of The Who, introducing his book, Thanks a Lot, Mr.Hepplewhite, and reminiscing over his youthful years.
Great for any fans of the band.

This is a fantastic interview with Rodger Daltrey. As it's so interesting to hear his little life

Poor Roger Daltrey this was one boring interview

Roger Daltrey is an interesting guy and this could have been really interesting and worthy of his time and mine. It is not, its dull and his interviewer was tedious. Who thought up such banal questions? It was puerile drivel that was actually insulting to the artist. No more of this thank you.