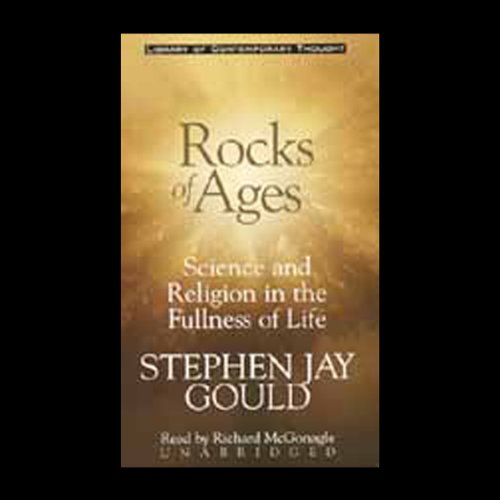 Science and Religion in the Fullness of Life
By: Stephen Jay Gould
Narrated by: Richard McGonagle
Length: 4 hrs and 38 mins
Categories: Religion & Spirituality, Non-Fiction
4.5 out of 5 stars 4.5 (2 ratings)

Since the Renaissance people have been plagued by the tense battle between Science and Religion. Internationally renowned best selling author and evolutionist Stephen Jay Gould sheds new light on the dilemma in this provocative, fascinating, and relevant audio. In elaborating and exploring the issue, Gould argues that in order to experience the fullness of being human, we must cultivate a meaningful balance between a life of spirit and a life of rational inquiry; 2 realms, equally essential but utterly different.
©1999 Stephen Jay Gould (P)1999 NewStar Media Inc.

What listeners say about Rocks of Ages

Tame and bland compared to his other books

I love Gould's insights, read almost all his books and mourned his passing. This book is different, rather than letting the data and drive conclusion, Gould decided on the conclusion and presented little that opposed this.

For example, Gould is correct that Galileo's problems were more political then scientific. But he never explores the damage to popular science that the Catholic Church did by Galileo's public trial. If you inadvertently knock a flowerpot off a 22 story building and the impact destroys a pedestrian's head; there may be a legal difference if it was intentional or accidential, but to the poor walker it matters not, nor if the flower was an almost dead marigold or a prize winning orchid. Gould basically talks about how wonderfully you grew orchid and not the consequences as he expounds upon how the higher ups in the Church discuss and debate all sorts of scientific and philosophical ideas. He ignores that these discussions do not lead to any ground-breaking policies or reforms.

Engaging but did we need to write this book?

I liked it. It was interesting, but I was never sure it needed to be written. I wonder if those that need to understand the concept of Non-overlapping Magisteria would ever read the book. I think he cited great examples, and explained himself well. I did learn that 1) the flat Earth idea wasn't how we viewed the world in the Middle Ages, we only started to say we did in the 1870's. and 2) that the idea of the conflict of science and religion was a made up idea. Those were both good to know. Seemed like a lot of work for a simple idea. I liked it. I like Stephen Jay Gould. Wouldn't call this his best book, but still interesting. It was worth reading. It definitely help my attention.

In this short book the late Stephen Jay Gould makes a valiant attempt to reconcile religion and science. To do this, Gould, an evolutionary biologist and a prolific essayist who wrote a monthly column for the magazine Natural History until shortly before his all too early demise, introduces the idea of NOMA, or non-overlapping magisteria. Religion and science should not be seen as rivals for the loyalty of anyone because they occupy and have authority over domains (magisteria) that don't really intrude or overlap. Science is in this sense then, truly about the ages of rocks, and religion, with its realm being that of the spiritual and ethical is concerned with the Rock of Ages. Of course, to accept Gould's argument, one has to concede that what one's conception of evidence and authority is subject to this strict definition of proper authority. This is where Gould runs into a bit of trouble--should non-believers just concede that a spiritually minded person has an equally legitimate claim to truth as an atheist or agnostic (or the proposition can just a validly be phrased in the reverse). While I admire Gould and I am not as dogmatic about my lack of faith as say, Richard Dawkins, I am not sure how convincing the argument is. Gould seems to want to pour a lot of oil on the troubled waters of controversy (a laudable goal it seems) but true believers or non-believers will probably not buy it. Still, it is a pleasant book to listen to (Gould's essays are among my favorite pieces of nonfiction) and will stimulate thought.

Time has passed this book by

The book's theme is Science and Religion have non overlapping domains, Science can't give ethical and moral truths and that religion should be respected when it stays within it's own domain.

I'm glad this book is not influential today. When it was written (in 1998 according to the book itself) marriage equality was completely being shot down by the imprimatur of religion. Science actually refuted each of the arguments used by religion ("it's not natural", "people aren't born that way", "it's Adam and Eve not Adam and Steve who were in the Garden of Eden", and other statements which Religions defined as moral truths), and Science showed their statements to be false thus changing the dialog. Science didn't need to go into the ethical or moral sphere directly, but rather provided arguments to refute statements based on authority only. This book would have allowed the science but seems like it would have suggested it remain silent instead of challenging the religious dogma which was based on authority alone.

Another example, a current senator from Oklahoma has written a book on how climate change is impossible because his revealed religion tells him so based on his moral beliefs and his interpretation of his bible. That argument by itself deserves no respect. The science is speaking loud and clear and global warming is real and is man made. Once again, on strict reading of Gould's book he would have allowed the science to proceed, but he would have required respect in challenging the assertions. I would suggest the arguments put forth in that book should be attacked and shown no respect whatsoever.

He did say a couple things in the book that highlight its anachronistic nature. He says, what happened before the big bang is best left to religion since nobody can say what happened before. The overwhelming majority of today's physicist ignore that statement and give reasonable theories and speculate what happened before the big bang. Also, he thinks ID (intelligence design) is not significant (as he was writing in 1998). It is very relevant today. We even had a president since that time who thought Russia was Gog (or Magog) and is part of the 'end times' as prophesied in Daniel and Revelations.

Morality and ethics are complex. Reason, rational thought, experience and our empathy and concepts of reciprocity are good starting points. People who pretend to know things they don't know and thus have no doubt do not make for good starting points and are best ignored if possible, but unfortunately anti-Marriage Equality, Climate Denialism, Intelligence Design, and other such items have real world consequences and must be considered for what they are: absurd positions not worthy of respect.

Overall, the book is silly and is best ignored.

NOMA stands for, "Non-Overlapping Magisteria." Professor Stephen Jay Gould argues that Science and Religion each have a right to exist and value for Humanity. However, they should stay separate like oil and water. (My metaphor." But, several places in this book, SJG suggests that there should be lively disccussions between the two discrete mutually exclusive groups. Why? Many public intellectuals have disagreed with SJG's arguments herein, including Richard Dawkins and the late Christopher Hitches. And, I think that most scientists would disagree with SJG. Most scientists probably think that religion is just nonsense and should not be respected. I think that the biggest problem with this book is that SJG never defines, "religion." He is often saying that religion has merit, but he never really says why. He just says that religion is responsible for moral questions that science cannot answer. Most atheists would think that such a comment is insane. In fact, most atheists see religion as immoral. I could go on-and-on here. When I started listening, I found it difficult to follow. So, I stopped listening, read the book, then listened to it. So, two passes through this small book. At the end, SJG starts writng about syncretism. SJG hates syncretism. But, you know what? I like it. I am a Deist. I think that there is a Creator but this Creator is an Impersonal Generic God, maybe some kind of algorithm. Deist think that God came; God created; God left. Where did God go? Deist use the word, "elsewhere." Where is, "elsewhere?" Who knows, but not here. Aristotle was the first Deist with his Unmoved Mover. Spinoza was a Deist. Benjamin Franklin and Thomas Jefferson were Deists. Einstein was a Deist. Today, Deists think that God ignited the Big Bang and then left, leaving the physical laws of this Universe to fend-for-itself. So, I sort-of like syncretism. Syncretism is saying comments like, "Hey, gravity is godlike because gravity is a physical law." Or, to use one of SJG's examples: "If gravity was a bit stronger we would be ripped apart and if electromagnetism was a bit stronger we would collapse like a bad soufflé." Something like that. And, this proves that a Creator made these physical laws just-so in order to allow us to live. SJG hates this. In fact, throughout this book, SJG is belittling the significance of Human Beings, like we are no better than ants. Ha. I just can't go there. For me, as a Deists, Human Beings are the highest living form in the Universes. And, we must evolve ever to a greater being via Artificial Intelligence. For me, Human Beings must become little gods. So, I really can't agree with a lot of this book. Nevertheless, I'm glad that I read it.

Stephen Jay Gould remains insightful now as when he published this work in 1999. He passed away in 2002 in this 60th year. We miss your true wisdom and insight!!!

The weakest SJG (Creator rest his soul) I've read. I appreciated what he was trying to accomplish, but his grasp of theology was too poor to adequately make an argument. I much preferred theologist David Bentley Hart's "The Experience of God: Being, Consciousness, Bliss" (except for the bliss part, which I thought was hokum) and atheist Curtis White's "Atheist Delusions: Asking the Big Questions in a Culture of Easy Answers."