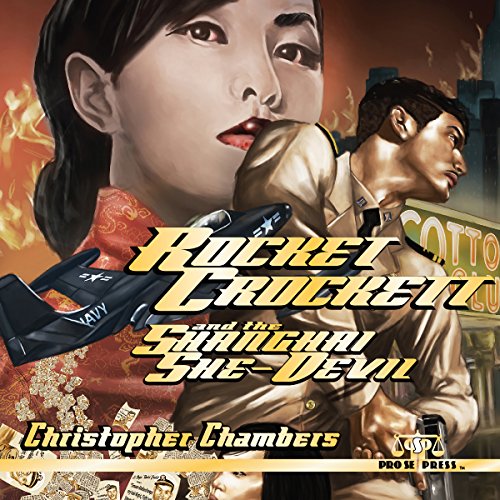 Rocket Crockett and the Shanghai She-Devil

Dusky derring-doer and Korean War jet jockey Lieutenant Rufus "Rocket" Crockett has thwarted a plot to flood America with a new species of heroin. But he has offended a terrifying, irresistible enemy: the Shanghai She-Devil. Her recompense? His flesh, his very soul.

In this homage to 1950s pulp, our hero battles gangsters on the streets of Harlem, assassins in the High Sierras, and MiGs in the skies over the South China Sea toward his showdown with an ancient evil! Author Christopher Chambers' high-flying hero takes to the skies once more in Rocket Crockett and the Shanghai She-Devil from Pro Se Productions!

"This stew of Cold War adventure, sorcery and post-modern cheek carries echoes of both Quentin Tarantino and Iceberg Slim, but it's safe to say that Christopher Chambers has found a pulp niche all his own!"- Louis Bayard, New Times best-selling author of Roosevelt's Beast and Mr. Timothy

"Strap in, adjust your goggles and get ready for a rip-roaring adventure as Christopher Chambers burns his storytelling jets incandescent in Rocket Crockett and the Shanghai She-Devil.” - Gary Phillips, editor of Black Pulp and Nate Hollis

What listeners say about Rocket Crockett and the Shanghai She-Devil