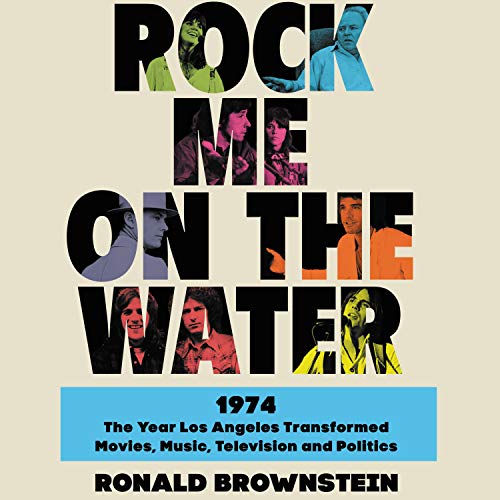 Rock Me on the Water

By: Ronald Brownstein
Narrated by: Will Damron

In this exceptional cultural history, Atlantic senior editor Ronald Brownstein - “one of America's best political journalists" (The Economist) - tells the kaleidoscopic story of one monumental year that marked the city of Los Angeles’ creative peak, a glittering moment when popular culture was ahead of politics in predicting what America would become.

Los Angeles in 1974 exerted more influence over popular culture than any other city in America. Los Angeles that year, in fact, dominated popular culture more than it ever had before or would again. Working in film, recording, and television studios around Sunset Boulevard, living in Brentwood and Beverly Hills or amid the flickering lights of the Hollywood Hills, a cluster of transformative talents produced an explosion in popular culture that reflected the demographic, social, and cultural realities of a changing America. At a time when Richard Nixon won two presidential elections with a message of backlash against the social changes unleashed by the '60s, popular culture was ahead of politics in predicting what America would become. The early 1970s in Los Angeles was the time and the place where conservatives definitively lost the battle to control popular culture.

Rock Me on the Water traces the confluence of movies, music, television, and politics in Los Angeles month by month through that transformative, magical year. Ronald Brownstein reveals how 1974 represented a confrontation between a massive younger generation intent on change and a political order rooted in the status quo. Today, we are again witnessing a generational cultural divide. Brownstein shows how the voices resistant to change may win the political battle for a time, but they cannot hold back the future.

What listeners say about Rock Me on the Water

1. The Reader/Narrator: The reader's voice is somnolent. Put me to sleep. It's a , "very important" tone, like that of a particularly pompous graduate school professor.

2. The Audio: The recording itself has very inconsistent audio. Skips, opening syllables of words cut out. Annoying to try to listen to after awhile, as it forces the listener to guess what was just said. Irritating in the extreme.

3. The Writing: Just. Not. Good. This author has a penchant for overheated and hyperbolic
adjectives.

4. The Subject: I was a senior in high school in 1974. I am 100% invested in hearing about this formative time in my life. I really want to hear about the artists, writers, musicians mentioned. I am this author's target audience. But I don't know if I can hear a Beach Boys song described as a "creamy ode to California girls." I mean, seriously. Pretty sure I'm even going to be able to hang in there to get to Chapter 2.

for people that remember 1974

I definitely remember all the music, movies, politics and TV. Nice trip down memory lane.

Good book just not as advertised

I enjoyed the book but it spent way too much time straying from the hidden stories about music, movies and tv in the early seventies - which is what I wanted to hear.

Pass on this one

I couldn't get past the first hour. It was awfully repetitive and not in an entertaining way.

Good narrator and interesting topic. I enjoyed the time line, the behind the scene stories; how bands, tv shows and movies came together in the early 70’s.

A look into a great moment in time

A thoroughly enjoyable look at a piece of time in a specific place that changed the future. The beautiful collaborations couldn’t hold together long but had long term effects. I encourage anyone to read this and hope for repeat somewhere in America.