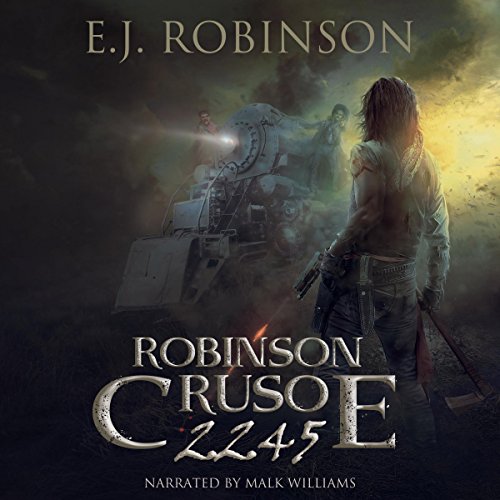 In the wake of the climactic events of book one, Robinson Crusoe returns to the forbidden continent of what was once North America in an attempt to rescue Friday from Arga'Zul, leader of the Bone Flayers.

But the path has not been easy. Strange and dangerous clans inhabit the ravaged lands. As obstacles arise and new foes join old ones, a desperate Robinson is forced to make risky alliances to find the woman he loves.

Sprawling in scope, with epic scenes of action and adventure, Robinson Crusoe 2245 is the thrilling tale of two young lovers willing to do anything to reunite, even if it thrusts the world back to the brink of doom.

What listeners say about Robinson Crusoe 2245

Everything a sequel should be

I was first introduced to E.J. Robinson's series Robinson Crusoe when I received a free audio book copy of Book 1. I really enjoyed it I eagerly but not patiently awaited the sequel Book 2. Robinson Crusoe 2245 (Book 2) is everything a sequel should be. It maintains the same high level of action as the first book. The familiar characters continue to grow and develop. New characters are introduced and enhance the story. More information about the universe the series exists in, how it came to be, and the different cultures that inhabit it are revealed. Malk Williams does an excellent job narrating this series. I really enjoy his voice and his performance.

Really loved the story line. The narrator was excellent. There was just enough difference in the voices to add that little extra in a story. I am looking forward to what comes next.

love the story, can't wait to listen again when I turn it off, the narration voice is great..don't want it to end

Adventure check
Great charterers check
Suspense check
Couldn’t stop listening check
I liked this book a lot one my favourite parts of it is the setting in a post apocalyptic USA and how the author decides that would
It always interesting seeing how people born 100s after the event see are world.
I like guess wear the are what city the run ins are in it’s great fun.

Excellent series so far! I honestly don't know how well this parallels with the original Robinson Crusoe novel since I was very young when I read it but I'm sure I'd like this version much better. The story of Crusoe in a post-apocalyptic setting! Excellent narration by Malk Williams! Can't wait for book 3!