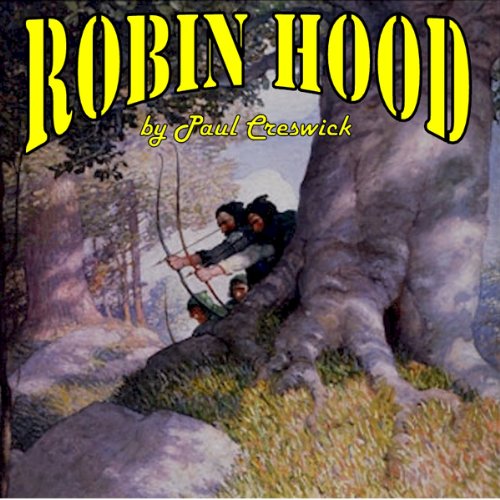 The man, the legend, and now the audiobook. One of the greatest stories of all time! More than nine-and a half hours of listening.

The story of Robin Hood was re-told on the big screen in 2010, with Russell Crowe and Cate Blachett in the lead roles. However, this audiobook is not associated with that or any other of the various movie or TV adaptations. It is the classic Robin Hood story, as told by Paul Creswick.

It's all here: the story of how Robin lost his birthright as the King's Ranger at Locksley; his archery feats at Nottingham; the outlaws' war with the Sheriff; Robin's pursuit of Marian; and many tales of bravery, rescue, laughter, and rivalry with Little John, Friar Tuck, Allan-a-Dale, Much the Miller, Will Scarlett, and all the others. Now you can have this incomparable story read to you, in a gripping full stereo audiobook.

The story presented here is adapted from the Paul Creswick text. It is faithful to the entire original story, but with the language updated for the 21st-century listener.

What listeners say about Robin Hood