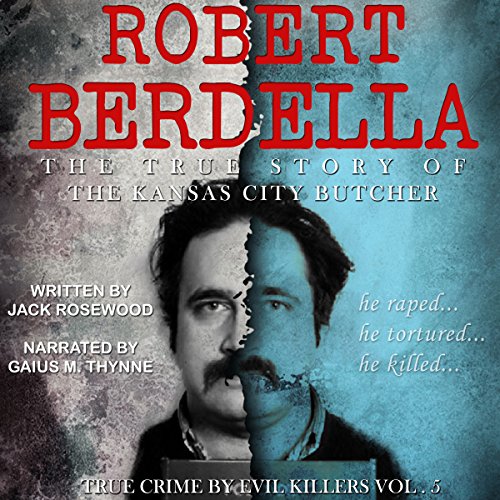 Robert Berdella: The True Story of The Kansas City Butcher

Robert Berdella: The True Story of The Kansas City Butcher

When Chris Bryson was discovered nude and severely beaten stumbling down Charlotte Street in Kansas City in 1988, police had no idea they were about to discover the den of one of the most sadistic American serial killers in recent history. This is the true story of Robert Berdella, nicknamed by the media the Kansas City Butcher, who from between 1984 and 1988 brutally raped, tortured, and ultimately dismembered six young male prostitutes in his unassuming home on a quiet street in Kansas City.

Based on the actual 720 page detailed confession provided by Berdella to investigators, it represents one of the most gruesome true crime stories of all time and is unique in the fact that it details each grizzly murder as told by the killer himself. From how he captured each man, to the terrifying methods he used in his torture chamber, to ultimately how he disposed of their corpses, rarely has there ever been a case where a convicted serial killer confessed to police in his own words his crimes in such disturbing detail. Horrific, shocking and rarely equaled in the realms of sadistic torture - Berdella was a sexually driven lust killer and one of the most sadistic sex criminals ever captured. Not for the faint of heart, this is the tale of Robert "Bob" Berdella, the worst serial killer in Kansas City history and for those that are fans of historical serial killers, is a true must listen.

If you could sum up Robert Berdella: The True Story of The Kansas City Butcher in three words, what would they be?

Very well written; Easy to follow the "birth" of this killer as he strives, and ultimately succeeds in reaching his goal as a "collector".

When is finally caught and confesses.

Mr. Rosewood does it again. He tell the story of a sadistic individual's gruesome torture and murder of area prostitutes. His story is riveting and scary as Mr. Berdella was an unassuming individual who lived and worked within his community while committing these heinous crimes. Makes you look twice at your neighbor...

There is a warning on this book that it is graphic and it really is. It is hard to believe how horrible a serial killer can be. The author does a great job of depicting how Bob starts killing and how it escalates. Great writing and worth a listen!

Jack Rosewood does it again

I've read all of the previous3 books in this series and loved them all , but this one tops them all .. A must read for all suspence fans LOVED this book! I couldn't put it down! From the very first page until the final one...exciting!. Looking forward to following this Author...in fact all the people involved are interesting. Just read and enjoy.

I received a free copy of this book and voluntarily decided to review."

Wow! This guy was a maniac. I really enjoyed the narrator and how in depth the investigation goes into this case. This is the type of book a true crime addict like me love. Straight into the case with the details.
"This audiobook was provided by the author, narrator, or publisher at no cost in exchange for an unbiased review courtesy of Audiobookboom”

need to listen to

WORST narrator ever!! The story is good.

The narrator was just terrible! I have never heard a more flat, and totally mispronounced collection of words in all of my Audible listening experience. The story is very compelling but is almost totally ruined by the dreadful narration. This narrator has been used for all of True Crime by Evil Killers books, so the whole lot of them are a chore to listen to, listener beware!

Narrator ruined the entire listen for me.

Very flat, literally reading the story but without any changes in voice. So many words were mispronounced to the point of being almost humorous. I sure wish the team behind this series of books would consider a redo with a better speaker.

The story is very dark, and among one of the most infamous true crime reads.

Get a new narrator. Oh wait, now I am just repeating myself, lol