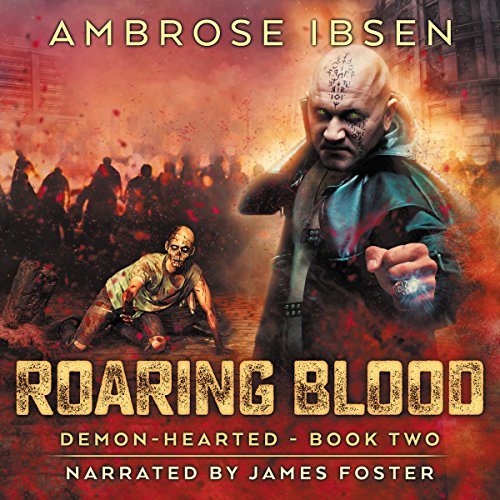 I'm Lucian Colt, and this story is mainly about me punching zombies in the face. Loads of 'em.

You'd think that life would be easy-breezy for a handsome, demonic badass like me, but you'd be wrong. The demon doesn't help me with rent, doesn't help me pick up chicks or anything fun like that. Instead, he's all about violence. Lots of it. So, when this super-powered necromancer shows up in town and starts emptying the city's graveyards, my buddy Gadreel thinks it's go time. Before the Veiled Order knows it, a war is about to break out between the living and the dead. Pretty scary, eh?

Oh, and get this! Turns out that this Demon-Heart gig isn't all it's cracked up to be. The guys who stuck this infernal organ in me left out the fact that, someday, when I die, I'll be heading straight to Hell. Ain't that a bitch?

Join me as I kick some major ass, have an existential crisis, get shot down by cute girls, generally mess everything up for my friends and, just maybe, come out of the deal having learned how valuable my teammates are. It's going to be a wild and filthy ride!

Trigger Warning: This book has a lot of guns in it, and sometimes, their triggers get pulled, resulting in devastating headshots. If you're not into that sort of thing, or if you've got issues with dirty words, dirty thoughts or talking spiders, then slowly back away from this book and retreat to your safe space. Wouldn't want you to get your feelings hurt.

What listeners say about Roaring Blood

Roaring Blood is about a fella trying to fight fire with fire, sort of, to do good in the world. It ain't always pretty, but he gets the job done.
Ambrose Ibsen brings another thriller to the world with some interesting takes on old ideas. He is very entertaining to read.
James Foster is an amazing narrator. He has a powerful voice but can make it do whatever the story calls for. I have listened to several books simply because he was the narrator.

Excellent second part in the Demon Hearted Series. Can't wait to hear the next book.

James Foster is excellent for reading these books

Great Book 2 of the series!

I so enjoyed the first book of the Demon-Hearted Series that I was very excited to see Book 2 out and jumped at the chance to give it a listen. In this story, Lucian (Luci) is the same sarcastic, but humorous character that we came to love in the first book, but he has taken a selfish and reckless turn. He compromises some missions and ticks off his friends in his quest to be the hero. Honestly, there were a few times I wanted to knock some sense into him along with the rest of his team. I loved that he redeemed himself in the fight against evil, even though he has the heart of a demon. It's a very interesting play between good and evil that I'm interested to see to the end. The narration is also incredible. James Foster just IS Lucian. I can't imagine anyone else giving voice to this unique character.

This book is action-packed, fast-paced and full of fun stuff like zombies, necromancy, holy swords, and exorcists. I received this audio book at no charge via AudioBookBoom in exchange for an honest review. I highly recommend you give this book a listen. Seriously, I enjoy this series so much I am chomping at the bit for the third installment.

Can not wait for book three!

This was even better than the first book. There is nothing in the first book that will prevent you from enjoying this book. Book one delineates how he received the demon heart and his relationship with the order.

Lucian (Lucy) is a little reckless in this story. That happens to some men when they get bigger toys. The demon heart makes him a little stronger and he wants to prove to everyone, especially people who intimidate him, that he is a bad ass, despite being a demon.

Being a leader means making the best decisions for your team, not having the highest body count or make the most important kill. Lucy is just ass hole enough to get people needless killed and spends the remainder of the story trying to prove that he learned his lesson.The secondary characters are funny and add to the book, especially the spider. Since the order uses him as a team leader it would make sense to have a set of the supporting characters.

From book one you also learn that Lucy was partially dead when given the choice of dying or being saved. But the order did not quite inform him of the small print in that option...giving him the demon heart means he will go to hell. It is not that he was Mother Teresa before he got the heart. But that is now a concern that will be (most likely) expanded in the next book.

There is action with all kinds of guns and explosives, cussing and other paranormal happening in the Motor City, Detroit, my home town. Enjoy this because I did!

For those of you playing along at home this is another fun, very entertaining and enjoyable addition to the series. Full of sarcasm, humor and non-stop action. The story is constantly moving forward pulling you in from the beginning and keeping you hooked until the end. Bottom line it's a darn good book. Definitely worth your time.

Lucy (Lucian) definitely has his faults, but what's a guy to do when they have a Demon Heart. Wanting to prove himself he tries to take on the necromancer by himself which doesn't end well. Putting himself, his friends and his teammates in a good bit of trouble. He needs to be a it more careful. Even a demon can be killed.

James Foster does a fantastic job with the narration. Nice voice.Easy to listen to for hours at a time. Great character voices. On spot delivery of the humor and sarcasm. Clearly spoken with a smooth even pace. He brings the characters to life through his narration. One of the best narrators out there.

I was voluntarily provided this free review copy by the author, narrator or publisher for an unbiased review

Great book!! I love this series. I love Lucien. Yes he is a whiner and butt head but he learns how to work with others. This book has it all. It is funny and full of action. This is just as good as the book 1 if not better. James Foster really brings the story to life. Cant till the next book. I received this book free for an honest review. However, it is worth a credit or the price of the book.. I do recommend. As i stated in my review of the last book. This book reminds me of the Dresden books. If you love them you'll love this series.

You like a different take on zombies than this is your book. Demons zombies and necromancers you can't get better.

I received this book free in return for a unbiased review.

I love this author, narrator and story

Love the style of writing and narrators tone. I can't wait for the next book!

Good story, with superb narration. This a good anti hero novel, I'm not sure the main character knows who he is just yet, but that's always the fun part of a journey. Good secondary characters and entertaining mythos make this series a good listen.

I haven't listened to book 1, but this book is great. Kinda gory in parts, but it's a zombie book, so it's expected. The narrator did a really good job with all the different characters and made the book stand out.