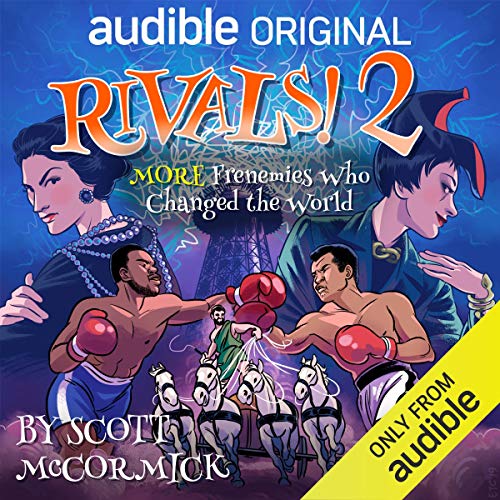 Exclusively on Audible, hilarious history for ages eight and up.

Fasten your falx knives and grab the reins of your quadriga: Rivals 2! More Frenemies Who Changed the World is the funniest look at people who benefited the world through their hatred.

Hear how the rivalry between Edison and Tesla literally changed the course of electricity, how sports fans nearly toppled the Roman Empire, how geniuses Chanel and Schiaparelli empowered women worldwide and had the greatest rivalry that wasn’t, and how the feud between Joe Frazier and Muhammad Ali was so intense more people tuned in to their fight than watched Neil Armstrong set foot on the moon two years earlier.

This audiobook has it all: death beams, chariot races, flaming costumes, ear-munchers, party fleas, and whatever the opposite of epic poetry is.... No fact is too bizarre, no segue too surreal, and no sequitur is too non for this riotous sequel.

What listeners say about Rivals 2! More Frenemies Who Changed the World

after the first audio book, I quickly preordered the second. I chuckled out loud just the same with the sound effects and all. looking forward to the third and again wished it was longer.

Great Job all around Mr. McCormick. This was every bit as good as part 1. I learned a lot and was laughing the whole way. Kudos to the cast too.

Loved the first book and I was not disappointed by this, I learnt a lot and laughed so much!!! Highly recommended, I hope there’s a 3rd one

I hope more of these are made. Such a great entertaining way to learn about true events.

A fun jaunt through conflicts in history

I only wish Scott would make all of history so much fun. Though there are lots of conflicts that moved the saga of civilization along so he might keep trying.

I loved every part of this audible book. it grabs your attention, communicates the history and research with a not so subtle hilarity that allows you to enjoy history. That is something I wish I had in my own classes. The narrator was excellent as well.

I have enjoyed the great history and the behind the scenes story.
One error.
Man landed on the moon July 20, 1969.

Similar to the 1st Rivals, I truly enjoyed this offering. I would recommend to anyone interested in unique historical reference presented in a humorous, entertaining fashion.

I love these books! The author does a great job in pulling you into the lives if the people he writes about. His story telling makes you want to learn more about each individual; and the fact he leaves a suggested bibliography makes it all the more easier to do so.

Absolutely the best funniest and yet historically accurate! I highly recommend this is a must listen to!!

Rivals 2 is a great book, it fuses comedy and history in ways that seemed impossible to do! Be sure to see Rivals 1! I wish to see more books in the incredible Rivals series.

Another great one from Scott Mcormick

After listening to the first book, I found that the rivalries in this one are slightly more obscure than the former book. Which by the way is a good thing! I love learning about history and I’m also in secondary where we do a lot of history and hopefully I’ll be able to use this knowledge learned moving forward in school!