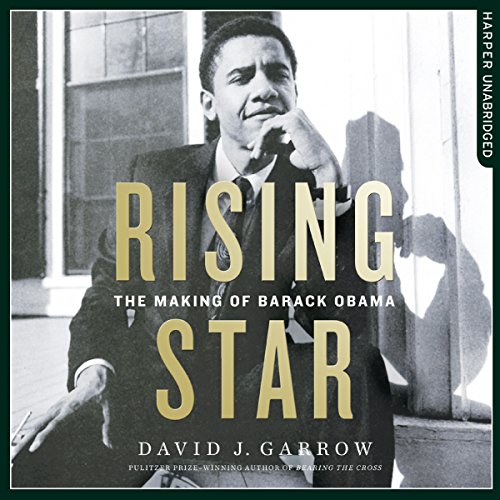 The definitive account of Barack Obama's life before he became the 44th president of the United States - the formative years, confluence of forces, and influential figures who helped shaped an extraordinary leader and his rise - from the Pulitzer Prize-winning author of Bearing the Cross.

Barack Obama's keynote speech at the 2004 Democratic National Convention instantly catapulted the little-known state senator from Illinois into the national spotlight. Three months later, Obama would win election to the US Senate; four years later he would make history as America's first black president. Now, at the end of his second presidential term, David J. Garrow delivers the most compelling and comprehensive Obama biography - as epic in vision and rigorous in detail as Robert Caro's The Power Broker.

Moving around the globe, from Hawaii to Indonesia to the American Northeast and Midwest, Rising Star meticulously unpacks Obama's life, from his tumultuous upbringing in Honolulu and Jakarta, to his formative time as a community organizer on Chicago's South Side, working in some of the roughest neighbourhoods, to Cambridge, where he excelled at Harvard Law School, and finally back to Chicago, where he pursued his political destiny. In voluminous detail, drawn from more than 1,000 interviews and encyclopaedic documentary research, Garrow reveals as never before the ambition, the dreams, and the all-too-human struggles of an iconic president in a sure to be news-making biography that will stand as the most authoritative account of Obama's pre-presidential life for decades to come.

What listeners say about Rising Star

An extremely well researched and detailed account of Obama's rise to power.
I appreciate that writing a book about a contemporary political figure is probably differcult to remain unbiased but it seems to me that the author has mined the vast material on Obama for negative content. At times the author seems mean spirited in his pedantic emphasis on negative aspects of Obama's life . i have read many biographies of world leaders and this is the most biased and least scholarly example of this genre i have found. Could it be that im the one who is biased? Maybe. I live in New Zealand and have never been a fan of any American president in my life time but am interested in the office they hold. This book didn't really do a good job of giving a balanced view of the man, in my opinion.

Important and fascinating work of scholarship

A remarkable work of contemporary history, Garrow's work paints a meticulous portrait of one of the most talented politicians of our times. The book is long and does sometimes feel a bit too onerous, especially when the author veers into descriptions of tangential events. But it is a work of history and not popular non-fiction, more concerned with rigour than trying to please the reader. Despite criticism of the book when it was first published, it paints what I consider to be an overwhelmingly positive portrait of Barack Obama. Except for the Epilogue, the author is careful not to make his own judgements and to let the reader make her or his own assessments. What emerges is a fascinating narrative of a self-made man searching for identity, purpose and status. It is only disappointing that the book seems to trail off the closer the reader gets to Obama's presidential run and presidency. I felt that the book deserved to be divided into Obama's early life until his Democratic National Convention speech in 2004. And another volume from that moment until the end of his presidency in 2017. For that reason, the last chapters seem somewhat rushed and more scant in detail.

Some critics have complained that Garrow gives far too much weight to Obama's former partners, especially Sheila Miyoshi Jager. In fact that doesn't come across in the reading - while Jager is a key character in his story she is but one of several important individuals documented in the book who influence Obama's life. What is clear, however, is the authors assiduous search for the man behind the myth. Therefore, it is both wise and insightful that the author chooses to provide an intimate portrayal of Obama at the moments when he was still defining himself and before he was a public figure. What emerges is a more complex, human and driven figure than the previously understood.

Before I listened to this book I read many reviews say that the book does not provide much new insight into Barack Obama. This is simple false. The book provides amazing insights into the man, not least that his breakout book 'Dreams from my father' is a work of fiction. That shadows another surprising revelation, namely, the extent to which the public figure Barack Obama is such a carefully created and crafted figure, down to the carefully choreographed and practised speeches and veneer of sincere, calm and casual demeanour. Obama was close to moneyed interests from the very start of his political career, and in many ways is a conservative politician. Another remarkable revelation is that he simply was not brought up as an African-American but rather as the son of a solidly middle class white family who only discovered the African American community much later in life and, arguably, only once he decided on a political career.

The book also reveals the impressive characteristics of the man: a brilliant scholar and lawyer, a man of iron will and inner strength, an inspiring orator with presence, charisma and a natural leader, and a thoroughly decent family man committed to his wife and family if entirely absent from them during the formative period of his political career. Not least, the book demonstrates what an extremely self-controlled and ambitious person whose clear focus was on the presidency, yet without much commitment to any particularly political or ideological agenda. That picture, ultimately, gave me new found respect for Obama even if ultimately it also made me feel so disappointed that he did not stand for anything more substantial than the symbolism of the first black American President.

Both interesting and ominous, I cannot but help leaving this book with the impression that Barack Obama represents the limits of the liberal American myth, one that is crafted so much on appearance and marketing, but which ultimately is more focused on style and impressions than substance. If the book reveals Obama's limits and failings, it does so by revealing the failings of the American liberal democratic experiment (which, for the record, I must confess I deeply admire and hope can survive the present political and social crisis that great country is facing!). For that reason alone, this book is essential reading for anyone interested in contemporary American and global history. It will also prove useful for anyone wanting to understand how the individual can succeed in politics in an increasingly polarised and market-driven political economy.