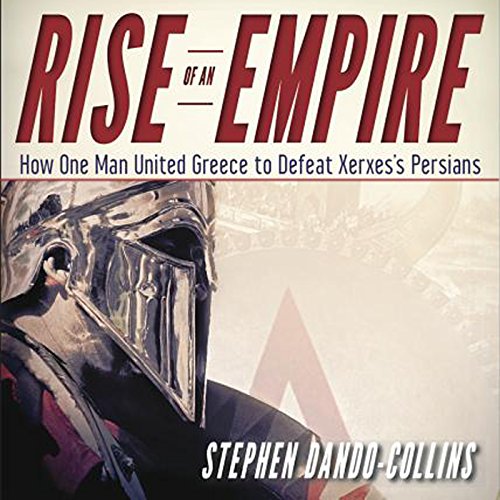 Rise of an Empire

The true story behind the events in 300: Rise of an Empire, the sequel to Zack Snyder's 300

The action-filled movie 300 focused on Ancient Greece's epic battle of Thermopylae, in which King Leonidas led 300 Spartans into battle against Xerxes and his million-strong Persian forces. In the sequel, 300: Rise of an Empire, the action moves to the sea, covering 10 years starting with the Battle of Marathon and ending with naval engagement the Battle of Artemisium, which occurred the same day as Thermopylae.

Rise of an Empire tells the story of the real men and events depicted in the movie, focusing on the Athenian general Themistocles, one of the world's greatest warriors. He became warlord of Greece, built their navy and, by uniting Greece to defeat Xerxes' fleet, enabled what we call western civilization. Packed with vivid detail, clashes of arms and ships, blood, and glory, Rise of an Empire tells a story even bigger than the big screen could contain.

What listeners say about Rise of an Empire

I really enjoyed this book. It is not just a list of facts, figures and names. It is great story and history of formative time in ancient greece. I appreciate the author's willingness to point out where he disagrees with classical authors or other writers. At first it is hard to keep track of all the names but towards the end it seems easier.

There are not very many books that focus on the life and trials of one of the most important figures of the ancient world, Themistocles. I really enjoyed this audio book and believe the author did his best to account for the many areas where the lack of evidence causes him to assume motivations and how events unfolded.

this audiibook was poorly edited. Several timees phrases were repeated AND the I counted two times the narrator got the dates wrong by one hundred years. Twice!

Always been a fan of Stephen Dando-Collin's books, it is a great story that detail the military, political, and economic situation of the Greco-Persian War's. This is a great audio book for anyone interested in the time-period.

My gripe is with the narrator constantly saying 392 BC 380 BC, when the events took place in the 400's BC. He does mention the 5th century BC, but the inconsistency may be confusing to those that have no background in classical history. Also it sounds like a computer was relaying the story.

Other than that I enjoyed this book and would highly recommend it to fans of classical Greece. Dando-Collin's is a magnificent author.

The narrator does a fantastic job bringing the text to life. I felt engaged and listening to every minute without boredom.

This is breathtaking in it's scope and mind blowing in it's detail, how can such an excellent book be associated with such a dumb and inaccurate film. don't judge a book by it's film, this is masterful.

A fascinating look into the history of the Greeks. Well written documentary on how the Greeks battled Xerxes. A little lacking in information sometimes but there is a lot of information to go through. Thoroughly enjoyed this, highly recommend.