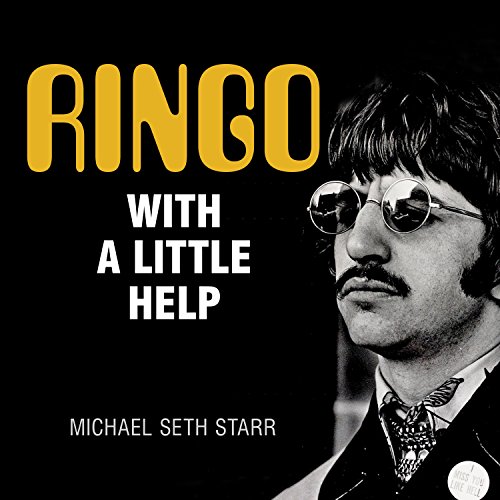 Ringo: With a Little Help is the first in-depth biography of Beatles drummer Ringo Starr, who kept the beat for an entire generation and who remains a rock icon since the Beatles took the world by storm over 50 years ago.

This book traces the entire arc of Ringo's remarkable life and career, from his sickly childhood to his life as the world's most famous drummer to his triumphs, addictions, and emotional battles following the breakup of the Beatles. Born in 1940 as Richard Starkey in the Dingle, one of Liverpool's most gritty, rough-and-tumble neighborhoods, he rose from a hardscrabble childhood marked by serious illnesses, long hospital stays, and little schooling to emerge, against all odds, as a locally renowned drummer. Taking the stage name Ringo Starr, his big break with the Beatles rocketed him to the pinnacle of worldwide acclaim in a remarkably short time. He was the last member of the Beatles to join the group but also the most vulnerable, and his post-Beatles career was marked by chart-topping successes, a jet-setting life of excess and alcohol abuse, and, ultimately, his rebirth as one of rock's revered elder statesmen.

What listeners say about Ringo

Ringo didn't authorize this book, so I will. Michael Seth Starr has done something most Beatles biographers don't do: He's taken Ringo from behind the kit and placed him center stage.

This is an enjoyable, fast-paced account of the drummer's life and work, from his Liverpool birth to his and Paul's appearance on the 2014 TV show commemorating the 50th anniversary of the Beatles on Ed Sullivan.

If you've read Beatles' bios, then you're not going to be surprised by the first half of the book. The author covers well-trod ground and he doesn't spend a lot of time on any event or album. So if you really love Sgt Pepper's and wanted to get an in-depth read on "With a Little Help from My Friends," it's not here.

The book really hits its stride at the midway point when the author takes on the story of Ringo's post-Beatles life. This story hasn't been told in detail, at least not in audio, and there's a lot more to that period than Ringo's drunken binges with Harry Nilsson, Keith Moon, Marc Bolan, John Bonham and John Lennon.

Michael Seth Starr shows a man struggling to redefine himself after the group that shaped his identity falls apart. But out of that chaos comes a slew of acting gigs, creative collaborations, albums and songs like "You're Sixteen", "Goodnight Vienna", "It Don't Come Easy" and "Photograph." Ultimately, Ringo rocks back from divorce, the deaths of Lennon and Harrison and alcoholism to mount several successful tours with his All-Starr Band and comes to terms with a public that will forever see him as a Mop Top.

I would've loved to hear more about Ringo as a musician--what he did on certain songs that made him such an admired figure in the drumming community. At the very end, the author does provide interviews with four drummers on Ringo's influence. Just would've liked more.

The narrator Peter Berkrot is a good reader but he doesn't do a Liverpool accent. But not many Americans can do that well.

Like a million other guys I was that 5th Beatle "born" February 9, 1964 as I watched mesmerized as these so called mop tops enchanted us from the Ed Sullivan theater. I've read many histories of the Beatles and have many books but listening to this account which focuses on the groups talented timekeeper, was an absolute delight. I believe the author tells us in the very beginning that Ringo did not give him his endorsement so it is unauthorized and yet I have to think if he listened to this, he would give him a thumbs up or at least his trademark two fingered peace sign. Thank you Ringo for your place in rock history. And thank you Michael Seth Starr for showing us the depth of this multifaceted human being, warts and all, who has the heart to care about all who he has influenced.

Enjoyed this book. It had interesting and new info on the Beatles and Ringo's role in the group as well as on Ringo alone. A must read for Beatles fans.

not very good . I was disappointed ! I hoped for more, maybe someone will do a better job

A number of inaccuracies made this book one with which I was never going to be particularly impressed, but Peter Berkrot absolutely destroyed any chance of my ever finding it even possible. His voice is astoundingly irritating! It's difficult to describe exactly what I hate so much about his voice, but just listen to a few seconds of the sample provided here on audible for Raising Men and you'll get a taste of it. I suppose the random volume changes and something akin to vocal fry (?) are his two most egregious vocal qualities. However, that's not all the annoyance you get with Ringo: With a Little Help, because on top of Berkrot's usual grating vocal mannerisms, his reading of this book is made even worse by his ridiculous attempts at British accents. For the most part he gives Ringo what my husband called a cartoon leprechaun voice. While LIverpool has been called the capital of Ireland, and there are some similarities between Liverpool and Irish accents, Liverpudlians do not speak with terrible Irish accents! And, if that butchery isn't enough to drive you nuts, he occasionally slides into other unrealistic european accents for Ringo as well. This was the worst narration I've encountered in my many years as an Audible member! I'll be returning it just as soon as I post this review. Note to authors of books on the Beatles: HIRE A BRITISH NARRATOR who can do accurate versions of various British accents & is without irritating vocal habits!. The George Martin biography, Maximum Volume, was almost also ruined by the narrator, who gave George Martin an accent that was nothing like Georg's.

Narrator's Impersontaion of Ringo Was Annoying

I'm a Beatles fan and there doesn't seem to be a lot around about Ringo so a natural choice for me.

Maybe it's because I'm from Liverpool that the narrator's awful impersonation of Ringo annoyed me so much but it really really did. It wasn't even as bad as the old Beatles cartoon voices which would have been more than acceptable.

love the book, an excellent insight - but can't tell if the narrator thinks Ringo is Irish or Mexican, judging by the accent.
all in all, worth the purchase!

Only thing that lets it down is narrator

All in all quite a nice companion book to other Beatles biographies . But the American narrator is awful . By far the worst I have heard narrating any audiobook . When he tries to do the Liverpool accent it comes out as some odd mix of Mexican and Irish .

...the narrator shouldn't have bothered trying a Liverpudlian accent. They should have used a native.

The book didn't tell me much more than I knew already and I would class myself as a Beatles fan.

This has two main issues; the book and the performance. Firstly the book. I am not sure there is any worthwhile new research here. Much of the work is a rehash of already existing work. There are extensive meaningless quotes from non-important articles, shows etc. Also there are some fundamental inaccuracies,beg Paul writing Across the Universe, and Andy Capo being a cockney cartoon character. As for the performance, it made it difficult to continue to the end it was that bad. Also, the Scouse accent is abysmal. He was not Hollywood Irish. Then halfway through the performance the accent changes, but not for the good. Why has someone not told him his accent was awful. Also IT IS NOT Mercy, it's Mersey, as in river, beat sound etc. Avoid like the plague.

really enjoyed this book very informative loads of meat on the bone and the narrators attempt at a Scouse accent is absolutely hilarious , worth it for that alone

Love The Beatles, love Ringo. Brilliant story in this audio book but the "Liverpudlian" accent the narrator uses is horrendous. Starts out as Southern Irish, moving north before finishing in an unknown area in East End London..... If you can get past the voice, you'll love this. PEACE & LOVE

Why why would someone attempt a Liverpool accent when they can’t do it, sounded like a mix between an Irish and Indian accent