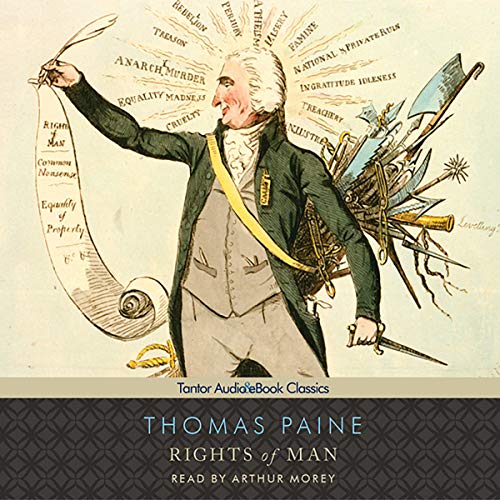 Rights of Man presents an impassioned defense of the Enlightenment principles of freedom and equality that Thomas Paine believed would soon sweep the world. He boldly claimed, "From a small spark, kindled in America, a flame has arisen, not to be extinguished. Without consuming... it winds its progress from nation to nation."

Though many more sophisticated thinkers argued for the same principles, and many people died in the attempt to realize them, no one was better able than Paine to articulate them in a way that fired the hopes and dreams of the common man and actually stirred him to revolutionary political action.

What listeners say about Rights of Man

By his voice alone he helped transform the West

Thomas Paine is one of those writers who seemed to have been dropped by a deist God 200 years before the world was really ready for him. His energy, honesty and political bravery was intense. By his voice alone he helped transform the West. Common Sense, the Rights of Man, and finally the Age of Reason have all thrown the gauntlet down and caused people to either cheer him (Common Sense) or hiss his name (Age of Reason).

The Rights of Man was visionary in its call for intellectual republicanism and social justice. Paine was and is a prophetic voice for individual freedom and moral equality. He is my favorite founder to quote whenever I find myself in a debate where someone wants to lump the 'Founders' together in some giant Libertarian Christianity pudding. He was a true radical and a true American.

That American children don't have to read "Rights of Man" in high school. Many of the topics Paine discusses in his book are still relevant today or need to be brought up again. Paine is the father of two revolutions (the French and American) and his work is incredibly insightful even 200+ years later.

100% of Americans should know the works of Thomas Paine. If only the modern day had men of such stature and integrity.

T. Paine is the man

I thoroughly enjoy the works of Thomas Paine. He captures the truth of his era and is one of the forerunners of modern political philosophy.

Interesting, but in some senses dated

The book is very interesting as a historical document. However, one should pay very careful attention to the subtitle. If one is looking for a detailed argument explaining the basis of and justification for the doctrine of natural rights one will be disappointed. The book is fundamentally a reply to various positions taken by Edmund Burke against the French revolution. Thus, as I said above, as a historical document it is fascinating. But, it is not, and frankly as the subtitle indicates is not intended to be, a systematic treaties on the nature and origin of “rights“.