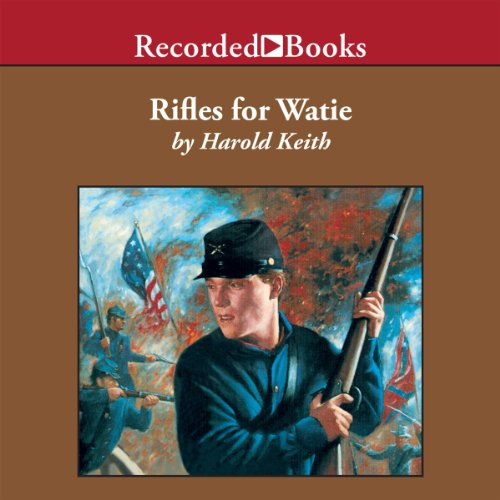 With fighting erupting around his Kansas farm, 16-year-old Jefferson Davis Bussey can hardly wait to join the Union forces. He wants to defend his family from the dreaded Colonel Watie and his Cherokee Indian rebels. After enlisting, Jeff discovers the life of a soldier brings little glory and honor. During battle, his friends die around him. And when he infiltrates Watie’s camp as a spy, he discovers the enemy is much like himself—only fighting for a different cause. As Jeff collects information, he wonders if he will be able to betray his new rebel companions when the time comes for him to return to the Union forces. Historian and author Harold Keith packs this well-researched novel with fascinating details and breath-taking action. Rifles for Watie was named an ALA Notable Children’s Book and won the Lewis Carroll Shelf Award. Believable characters and vivid battle scenes burst from the pages of history with narrator Tom Stechschulte’s dramatic performance.

My 12 year old loved this book. It was exciting and realistic. I loved it as it gave my son a literary example of a young man transitioning into adulthood with his honor intact.

I read this book for the first time in high school and loved it then. I've read it several times since and enjoyed it each time. this is the first time that I've listened to it on Audible. The performance was quite good, the voices were well done and I enjoyed the pacing that the narrator used.

I would listen to this book for hours at a time. Very nicely done. I would stay up at night unable to sleep, wondering how the book would end! If you do listen to this, and enjoy it like I did, you should listen to Mr. Tucket, another great story.

My fifth graders and I enjoyed this performance very much. I was happy to listen to the reader's voices and accents instead of attempting them myself! Well performed, well written. I do not recommend the story for a younger audience, however, due to certain violent scenes.

I've read this book many times over the years. never gets old.i recommend it to all.

Balanced treatment of the Civil War

One of the most delightful recordings I've ever heard! Exceptional story and narration, with multiple voices, accents and emotion.

I read this book almost 20 years ago and loved it. I listened to it now and loved it just as much!

What a fantastic book!

1. RfW takes a surprisingly realistic view of warfare. There is no glorifying of war in the book. The protagonist—Jefferson Davis Bussey—who is only 16 when he enlists, is really looking forward to war...until he actually experiences it. It is shocking to him, just as it is to everyone else who experiences it. Mr. Keith does not glamorize warfare.

2. The death of Jimmy the drummer in RfW, while illustrating the horror and tragedy of war, is one of the most poignant death scenes in all of literature, and subtly Christian. One comes away with a visceral understanding of the terror and tragedy of warfare, the sadness of a boy that is gone too early, and the hopelessness of the whole thing, but the author manages to infuse the scene with hope from the Christian perspective. It's a sad, terrible, but oddly redemptive scene.

3. Our protagonist, through being surprise enlisted into Stand Watie's Confederate Cavalry while out on scout for the Union side, allows Mr. Keith to explore the humanity of both sides in the war, and Jeff Bussey to realize that there were good and bad people on both sides of the conflict.

4. This book is a fantastic bit of historical fiction, it has everything, good action, comradeship in arms, dogs, and a love story. What else do you need for a great book?

I've read this book I don't know how many times and I love to relive it every time. The main problem is the mispronounced words like "drought" being pronounced "drouft". The voice fits well enough but I'm picky about the quality of the reading.