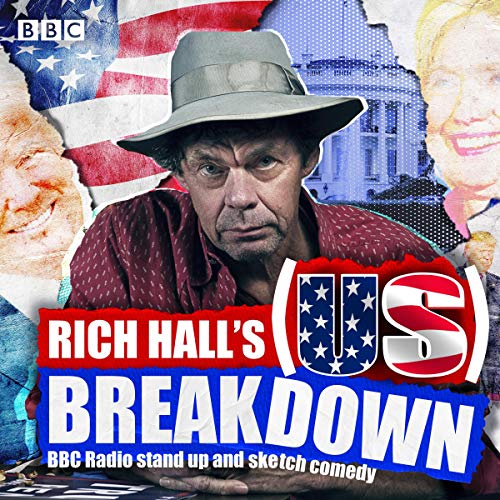 Comedian Rich Hall takes an acerbic look across the pond at US politics, from the closing stages of the 2016 election to the 2020 race for the White House.

Welcome to Washington, DC's favourite political phone-in show, as multi award-winning comedian (and American citizen) Rich Hall and a selection of comedians from both sides of the Atlantic reflect on the latest political events in the United States.

Using a combination of stand-up, sketch and interview, Rich Hall’s (US) Breakdown broadcasts live from the fictional IBBC network in Washington to the whole of America, as Rich and his producer Nick Doody take calls from every corner of the country to hear the concerns of voters and give us their take on the issues troubling the US electorate.

Speaking to American pundits, comics and the man on the street, the series guides us through the chaotic circus of a presidential race and offers an insight into the unfolding drama of Donald Trump’s presidency. Hall muses on Trump’s first 60 days in office and first 12 months, breaks down the result of the US midterms and weighs up the relative merits of the candidates seeking the Democratic Presidential nomination in 2020.

Enlightening, entertaining and engaging, Rich Hall’s sardonic, satirical take on the state of his nation will appeal to anyone with even a passing interest in US politics.

Written and presented by Rich Hall and Nick Doody.

"I could listen to Hall for ever. His laconic, hilarious intelligence and beautiful use of language is always a delight." (Miranda Sawyer, The Observer)

What listeners say about Rich Hall's (US) Breakdown