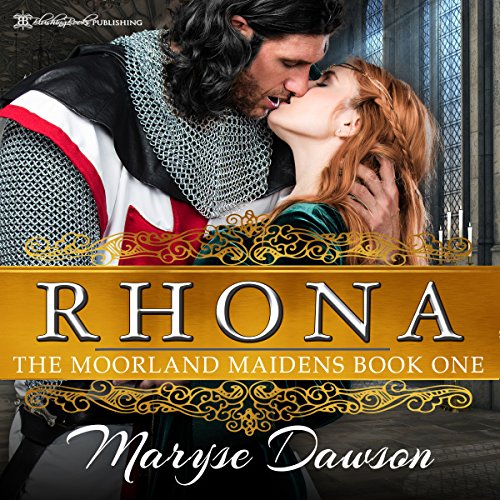 In the year 1091, the Scottish king, Malcolm III, is a thorn in England's side. He is constantly invading and taking English lands for his own gain. The English king, William II, has had enough. Seeking to bring Malcolm to heel, he demands the capture of his nieces to use as hostages against him.

By the king's command, Rhona and her cousins are captured and taken south, where they are imprisoned as pawns to be used in a battle between kings.

But Rhona is no milksop. With steel in her heart and fire in her belly, she seeks to escape at every opportunity. A difficult task, when her gaoler is a handsome Norman knight who has no compunction in taking a feisty maiden to task.

Leon has never met a woman like Rhona. Her fiery spirit stirs him like no other and he finds himself falling in love with the passionate, auburn-haired maiden. But can he win her heart? Will she ever be able to love the man who took her captive?

What listeners say about Rhona

An enjoyable read starting out with a kidnapping and love follows. I enjoyed the struggle the girls give and how Rhona out witted Leon. For a minute I thought it was going to go in to BSM with the spankings but nothing became of that which was great by me. I enjoyed the conflict the two had as well as their romance. There was romance but it moved a little fast, they are kidnapped, something happened, she is back with her parents, they meet again, and they fell in love. There wasn’t a lot of enter action but it was a good story that for the most part held my attention. It isn't all cut and dry there are issues they have to overcome to be together which is intersting.

I thought the narrator was great he brings a lot of emotions to the story. His male and female character voices were pleasant as well as his normal voice. I always knew who was talking and what they were feeling. He made it easy to picture the limb that fell and the scenes that come after it. I thought that was funny and chuckled a few times. There is no repeating of words, no background, I could not tell if any breaks were taken, the volume stayed the same throughout. He gives a great performance that pulls you making you feel each emotion that the characters are feeling.

Rhona is a spit fire not taking the kidnapping laying down, she is always looking for a means to escape as well as giving her kidnapper a run for his money. It was very easy to like her and her spirited ways, as well as fiery attitude. Leon character fits with this time period, do as I say or else. He can be gentle but very strong willed. He doesn’t know just how to take Rhona which leads to some fun reading.

I thought the spanking scenes were a little much with her bare bottom in the air, I am sure they wear some type of underclothing back in that time period. For the most part it was a good listen, interesting and at times pulls you in. I laughed a few times and felt their pain a time or two. All in all it was not a bad listen and I did enjoy it. The story I give a 3.5 moving it up to a 4.