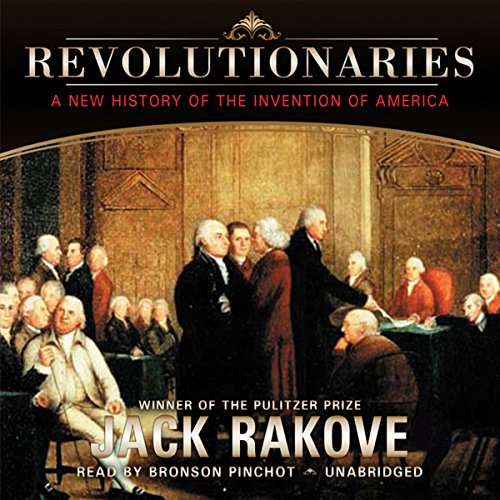 In the early 1770s, the men who invented America were living quiet, provincial lives in the rustic backwaters of the New World, devoted primarily to family, craft, and the private pursuit of wealth and happiness. None set out to become “revolutionary” by ambition, but when events in Boston escalated, they found themselves thrust into a crisis that moved, in a matter of months, from protest to war.

In this remarkable book, historian Jack Rakove shows how the private lives of these men were suddenly transformed into public careers - how Washington became a strategist, Franklin a pioneering cultural diplomat, Madison a sophisticated constitutional thinker, and Hamilton a brilliant policymaker. Rakove shakes off accepted notions of these men as godlike visionaries, focusing instead on the evolution of their ideas and the crystallizing of their purpose. In Revolutionaries, we see the founders before they were fully formed leaders, as individuals whose lives were radically altered by the explosive events of the mid-1770s. They were ordinary men who became extraordinary - a transformation that finally has the literary treatment it deserves.

Spanning the two crucial decades of the country’s birth, from 1773 to 1792, Revolutionaries uses little-known stories of these famous (and not so famous) men to capture—in a way no single biography ever could - the intensely creative period of the republic’s founding. From the Boston Tea Party to the First Continental Congress, from Trenton to Valley Forge, from the ratification of the Constitution to the disputes that led to our two-party system, Rakove explores the competing views of politics, war, diplomacy, and society that shaped our nation.

Thoughtful, clear-minded, and persuasive, Revolutionaries is a majestic blend of narrative and intellectual history, one of those rare books that makes us think afresh about how the country came to be, and why the idea of America endures.

“A serious, probing work of history that boils down a career’s worth of thinking and research.” ( New York Times)
“Rakove manages to demystify the leaders of the Revolutionary era even while clarifying the terms on which they continue to deserve our admiration.” ( San Francisco Chronicle)
“A sparkling, authoritative work…Everyone interested in the founding of the U.S. will want to read this book.” ( Publishers Weekly)

What listeners say about Revolutionaries

A worthy companion to Chernow’s Hamilton bio. Obviously, it doesn’t go into the same detail and depth as a full length of book devoted to Hamilton‘s life might, but this contains details of those incidents that make up Hamilton’s life which aren’t available in Chernow’s. It seems that Miranda even cribbed some phrases from this tome for his musical. Additionally, it goes into many interesting details in fact from the other founding fathers lives as well. Adams, Jefferson, Madison, and Washington all get new illumination into their lives. The audiobook narrated by Bronson Pinchot is very well performed. In fact, I had a hard time being convinced that the same person narrating this book is the person who performed Balki on the TV sitcom. Check it out.

Expert performance by Pinchot but the substance wasn’t necessarily new when compared to other deeper historical investigations on the exact same topics. Some of the anecdotes were seemingly uncommon (ie not commonly found in other analogous histories) and did enhance the story and my knowledge of the subjects but again anecdotal.

I really enjoyed reading an in-depth perspective on the founders of the country imperfections and all. Very well research and a book worth hearing twice to gather all that is heard. The narrator was also fantastic and used great pronunciation of the French words.

Tried but could not get into it

The topic is handled much better in other books I have listened to. I also had trouble with the narration. I gave it a couple of stars as I did learn some new items on the topic.

Way Too Long, Disorganized, and Unselective

What disappointed you about Revolutionaries?

The author wastes way too much time on a number of historically minor characters, with the usual major historical figures absent for long stretches of time. His narrative is disorganized, with much jumping from one character to another, and back and forth in time. Finally, his language is excessively complex and wordy; if something can be described in five simple words, he will use fifty complex ones, with one or two French ones thrown in for good measure (although this does give Bronson Pinchot a chance to show off his impressive French accent).

This book is like an early draft of an extremely ambitious PhD thesis. Maybe after some serious trimming, focusing, and rewriting, it would actually be enjoyable. But until then, stay away. It was pure torture.

Would you listen to another book narrated by Bronson Pinchot?

Sure. He's come a long way from Serge and Balky.

What character would you cut from Revolutionaries?

All but the major historical ones (Washington, Franklin, Jefferson, Adams, Hamilton, etc)

I listened to this book right after finishing