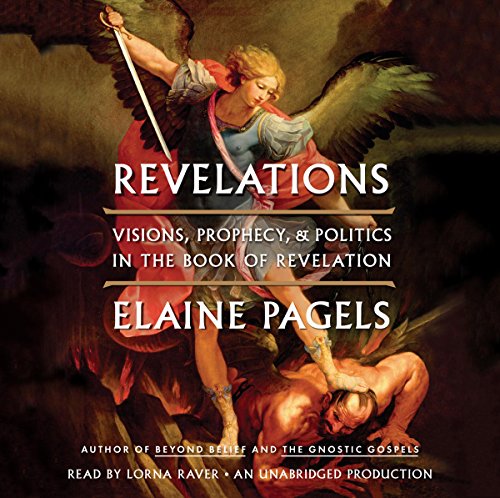 Elaine Pagels explores the surprising history of the most controversial book of the Bible. In the waning days of the Roman Empire, militant Jews in Jerusalem had waged an all-out war against Rome’s occupation of Judea, and their defeat resulted in the desecration of the Great Temple in Jerusalem. In the aftermath of that war, John of Patmos, a Jewish prophet and follower of Jesus, wrote the Book of Revelation, prophesying God’s judgment on the pagan empire that devastated and dominated his people. Soon after, Christians fearing arrest and execution championed John’s prophecies as offering hope for deliverance from evil. Others seized on the Book of Revelation as a weapon against heretics and infidels of all kinds.

Even after John’s prophecies seemed disproven - instead of being destroyed, Rome became a Christian empire - those who loved John’s visions refused to discard them and instead reinterpreted them - as Christians have done for 2,000 years. Brilliantly weaving scholarship with a deep understanding of the human needs to which religion speaks, Pagels has written what may be the masterwork in her unique career.

What listeners say about Revelations

Elaine Pagels' books on early Christianity introduce the lay reader to a concept familiar to almost any seminarian or graduate student of religion--that is, that the development of early Christianity into modern doctrinal mainstream Western Christianity was far from inevitable. Certainly many readers will be aware of much later fissures within the body of Christianity, including the 11th century split between the Western Catholic Church and Eastern Orthodox Church, the 15th century rise of Protestantism, the 19th century birth of Mormonism and the 20th century advent of Pentecostalism. What may not be so well known is the wide diversity of belief and practice that existed within the growing Christian movement during its first few centuries.

Recent archeological discoveries, most notably the Nag Hammadi library and the Dead Sea Scrolls, both discovered in the mid-20th century, have just begun to reveal the diversity within Judaism and the beginnings of Christianity in the centuries immediately preceding and after the time of Christ. Pagels relies on these texts, as well as canonical Christian scripture, to explore in a highly accessible manner the historical context within which the the book of Revelations was written and the choices made at the many forks in the road along the way to the establishment of modern creedal Christianity.

Among the issues discussed in this book are: the eventual conflation (very probably erroneous) of the author of the book of Revelations with the apostle John; likely sources of the use of imagery in the book; the undercurrent in Revelations of antipathy towards the apostle Paul's inclusion of Gentiles in the Christian movement without requiring Torah obedience on their part; changing understandings of what was meant by "the beast"; the use of the book to suppress perceived heresies in order to consolidate Christianity in a Constantinian world; the controversial nature of the book from the time of its writing and the fact that it only made it into the Christian canon by the narrowest of margins. Pagels explains how John's was only one of many apocalyptic writings extant at the time, analyses the differences and similarities between his and examples of the others, and describes the process which ultimately led to John's book's inclusion in the canon

Pagels, a Christian herself, does not write with the intention of discrediting or diminishing Christianity, but rather to open up our understanding of the faith as a living and dynamic process. Those who have become disillusioned with established Christianity may find new inspiration here and those committed to modern Christian doctrine may find food for thought as well as a new appreciation for the complexities that went into the development of their religion. Whatever one's background, this book offers a fascinating insight into the growth of what was essentially a spiritual movement into the established global religion with which we are familiar today.

What made the experience of listening to Revelations the most enjoyable?

My interest in the Bible, its writers and interpreters and the author's coverage of the enigmatic Book of Revelation. Also the brief coverage of each of the ancient writings discovered at Nag Hammadi and why the early Church fathers decided to reject them.

What other book might you compare Revelations to and why?

Elaine Pagels' other books, e.g. The Gnostic Gospels and Beyond Belief. However, I think Revelations focuses more on John's writing of the Revelation of Jesus Christ, accompanied by the writer's interpretations - a little like a Bible study or a Church sermon. In Revelations, Pagels also spends a good deal of time on early Christian personalities and powerbrokers.

Did Lorna Raver do a good job differentiating all the characters? How?

The voice was a little hard to take at first, but I got used to it as the book progressed. Lorna Raver speaks very distinctly and with appropriate intonation and animation. Bit croaky for my liking.

The book provides a good, brief coverage of developments in the early Christian Church, and the powerful characters who influenced the composition (canon) of the Bible we read today.

Pagel Expands Our Understanding of Revelation

I would recommend this book to anyone who is interested in commentaries of the Bible. Pagel's generally broadens our understanding of the way the Bible was put together--how decisions were made and why.

What was one of the most memorable moments of Revelations?

The conclusions near the end, emphasizing why Revelation was chosen over other visionary writings of the time--and what these other writings have to teach us---was enlightening.

Her reading was clear, her pronunciations very good, and in general she seemed to understand the material she was handling.

I listened to it in about three sittings, and I would not recommend stretching out the listening process. Too much would be lost between sessions. One needs to stay in the "flow" of the book.

I think religious fundamentalists would not like this book, but then it was not written for them. Pagels writes in terms that any interested person can comprehend. I think her popularity has been her ability to avoid strictly "theological" terminology and language.

In this book, Pagels puts Revelations in its historical context and shows how it lies in the tradition of Jewish prophetic/apocalyptic literature and how it may be related to gnostic-Christian literature. She described, correctly in my opinion, how it was really a rather close thing that the book came to be included in the New Testament--still being debated in the 3rd and 4th centuries, as the canon was solidified. Pagel's book is required reading for anyone who thinks the New Testament and particularly the book of Revelations was simply dropped out of the sky by God one day. She devotes a good deal of space in the book to Athanasius, the bishop of Alexandria. Was he a saint, a villain, or both? Fascinating account--how he co-opted the monasteries, how his Life of Anthony, the book that so influenced later Christians, is likely rather pure fiction to promote Church control of monasteries. Athanasius was responsible for suppressing gnostic writings (and, of course, Arius) and may have been the ultimate cause of the gnostic books being hidden at Nag Hammadi. Since this was the time of Emperor Constantine, Athanasius had to reinterpret the beast in Revelations to refer to Christian heretics rather than its rather obvious original 1st century reference to the Roman Empire. This is but one example, as she points out, of the continuing reinterpretation of the symbolism in this book over subsequent centuries to explain present calamities or to predict future ones. Lots more to the book than I can cover here. I thoroughly enjoyed the it. I also liked the reader--strong female voice for a strong writer.

it does not look like the writer was a believer and therefore did not dig into the truth found in the whole Bible and how it related to Revelation.

Revelation is not an easy book to write about, but it is not boring. I was bored.

Less about the book of Revelations, more about time period politics

I was looking for a book that could potentially explain Revelations, so I was a little disappointed, yet curious, when I realized this book was more about the political context related to the writing and inclusion of Revelations in the bible. Still, it is very interesting stuff, especially the part about "secret books" of the bible. Will certainly be looking up the gnostic gospels in the future. Worth a listen for context sake.

Not What I EXpected

Note first of all that the title is plural. This is not primarily an exposition or commentary on the book of Revelation. Instead, it is a history of so called revelatory writings, both Apocalyptic and Apocryphal throughout ancient history and the early Church age. Little is offered to the modern reader but a history lesson. And to the faithful, Pagels only offers a deconstruction that undermines canonical unity. I had hoped for a critical reading of John's Apocalypse that would give light to modern interpretations which have largely failed to inspire the Church toward her purpose and mission. There's none to be found here.

Another version of an earlier book...

I loved Elaine Pagel's great work... the "Gnostic Gospels."
Unfortunately, this is pretty much the same book.
The book contains some very interesting information about the origin of the Book of Revelations. But the remaining 80 percent of the chapters seemed unnecessary.