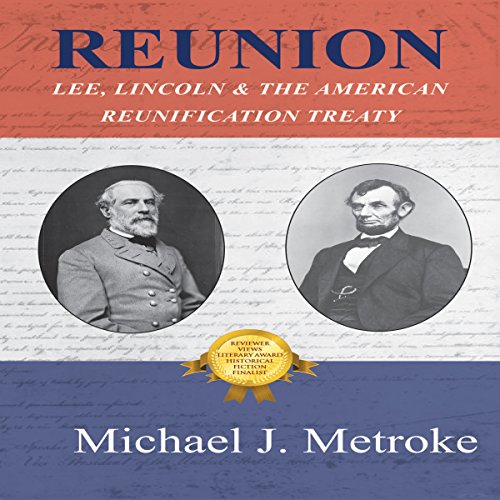 By: Michael J. Metroke
Narrated by: Joseph B. Kearns

Three years have passed since General Robert E. Lee routed the Union army at Gettysburg and caused the Lincoln government to flee Washington, D.C. Now, as president of the Confederacy, Lee realizes the hollowness of his victory as he watches the South he loved and defended slowly crumble before his eyes. Lee must reach out to the only man he believes can help him save the South - the disgraced and out-of-office President Abraham Lincoln. Amidst intense opposition, the two men secretly devise a plan that, if successful, could reunite the country once again.

Reunion is an intricate and thoroughly researched work of alternate history that examines the question: What if the South won the Civil War? Through engaging prose and an extensive cast of compelling characters, Metroke explores this question with the grace and sensibility of a seasoned novelist, and with the diligence and precision of a shrewd historian. The result is a book that is deeply satisfying from both a literary and historical perspective. Reunion is simultaneously entertaining and informative, human and political, and above all, historical and relevant. It is a must-listen for anyone who desires to understand the American politics of the past and the present.

Could not listen long enough to make a fair review

No. The audio recording of the narrative is simply too hard to endure for long.

Would you be willing to try another book from Michael J. Metroke? Why or why not?

Unknown, since the quality of the narrator and recording prevented my assessing the book in more detail.

Would you be willing to try another one of Joseph B. Kearns’s performances?

The quality of the recorded narration was too unpleasant to endure.

Of 375 audible titles I have purchased over the year, this is the first book I have been unable to listen to more than an hour. The recording sounds as though the narrator was several feet from the microphone in a room with very "live" flat walls. The narrator projects with a very loud voice, as though reading aloud in a very large lecture hall. The combination was simply too pleasant to tolerate long enough to listen to much of the book. I am not that picky (as my other 374 listens without complaint would suggest). This audible title must be professionally redone or removed. If you get the book and do not agree with me, please post your own impressions. If you do agree with me, then please urge audible to have the title redone or remove it from available titles.

too much echo, sounded like the narrator had to shout the whole story. otherwise a really good book.