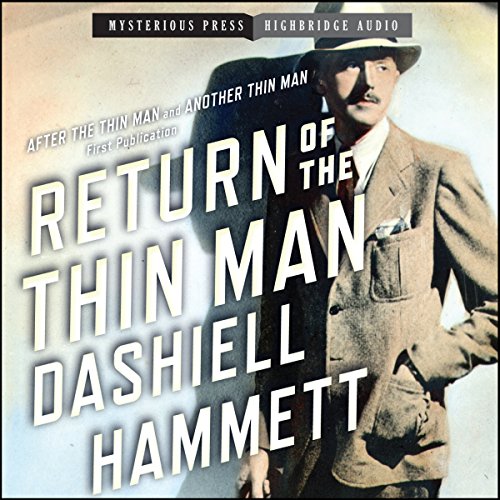 Return of the Thin Man

Dashiell Hammett was a crime writer who elevated the genre to true literature, and The Thin Man was Hammett’s last - and most successful - novel. Following the enormous success of The Thin Man movie in 1934, Hammett was commissioned to write stories for additional films. He wrote two full-length novellas for the films that became After the Thin Man and Another Thin Man. Hammett brought back his classic characters - retired private investigator Nick Charles and his former debutante wife Nora - in these two fully satisfying Thin Man stories, written with Hammett’s signature, barbed dialogue.

Neither of these stories has been previously published (except for a partial in a small magazine 25 years ago). Now together in Return of the Thin Man, these hugely entertaining novellas are destined to remain essential listening for Hammett’s millions of fans and a new generation of mystery lovers the world over.

What listeners say about Return of the Thin Man

This is a collection of 3 screen plays written by DH, with historical commentary mixed in before and after each. The narration for the male voices is good. The female voices are outstanding. By favorite portrayal is Aunt Catherine, or Katherine. She's not a likable character, but her voice is extraordinary. The voices are done like a radio play.

Interesting versions of the well-loved movie scripts penned by Hammett. However, I couldn't get past the voice of the actor playing Nick. My guess is he was trying to sound droll, but it didn't work. Similarly the actress playing Nora made her sound like a ditz.

History great. The rest not so much

The history lesson at the beginning was fantastic. The rest, not so much, didn’t like the actors. Sorry. Just couldn’t get past it.

My mistake I guess, but I thought this was a novel - bought it because I loved the Hammet short stories. This was so hard to follow as a screenplay and irritating as Hell too.

Others may see these things differently, and I should have checked first, but if you haven't checked properly don't make the same mistake as me.