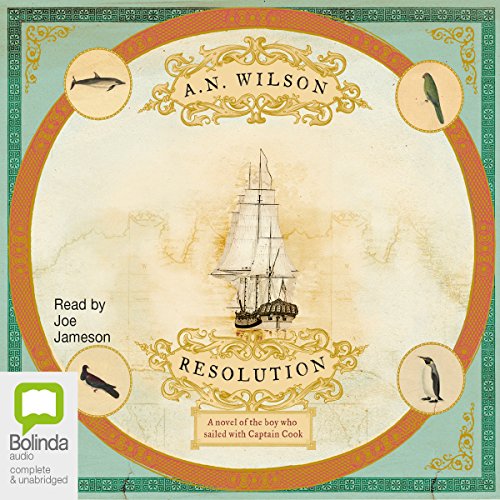 A novel of Captain Cook's adventures of discovery to Australia, New Zealand and Hawaii
By: A.N. Wilson
Narrated by: Joe Jameson
Length: 7 hrs and 49 mins
Categories: Fiction, Historical
3.5 out of 5 stars 3.7 (3 ratings)

From one of our leading novelists and historians comes a breathtakingly vivid novel that recalls the three voyages Captain Cook made to the southern hemisphere, culminating in the last, fateful expedition on which he was brutally murdered.

A. N. Wilson's powerful new novel explores the life and times of one of the greatest British explorers, Captain Cook, and the golden age of Britain's period of expansion and exploration.

Wilson's protagonist, witness to Cook's brilliance and wisdom, is George Forster, who travelled with Cook as botanist on board the HMS Resolution, on Cook's second expedition to the southern hemisphere, and penned a famous account of the journey. Resolution moves back and forth across time, to depict Forster's time with Cook, and his extraordinary later life, which ended with his death in Paris during the French Revolution. Wilson once again demonstrates his great powers as a master craftsman of the historical and the human in this richly evoked novel, which brings to life the real and the extraordinary, brilliantly drawing together a remarkable cast of characters in order to look at human endeavour, ingenuity and valour.