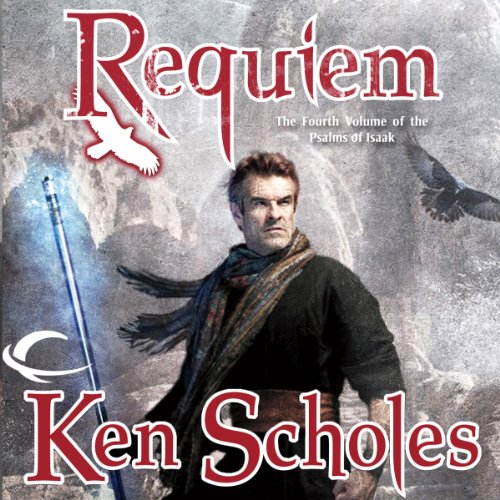 Ken Scholes’ debut novel, Lamentation, was an event in fantasy.

Heralded as a "meszerizing debut novel" by Publishers Weekly, and a "vividly imagined SF-fantasy hybrid set in a distant, postapocalyptic future" by Booklist, the series gained many fans. It was followed by Canticle and Antiphon. Now comes the fourth book in the series, Requiem.

Who is the Crimson Empress, and what does her conquest of the Named Lands really mean? Who holds the keys to the Moon Wizard’s Tower?

The plots within plots are expanding as the characters seek their way out of the maze of intrigue. The world is expanding as they discover lands beyond their previous carefully controlled knowledge. Hidden truths reveal even deeper truths, and nothing is as it seemed to be.

What listeners say about Requiem

A wrap up and stepping stone

I've enjoyed this series, though the initial books had me juggling so many characters, This is NOT a stand alone book. It is barely a read it a year after the last book book. I had to re-read the first one and take notes just to continue on with the series. That part of the series is done with this installment - for now. The characters are largely known for this and it wraps up the story lines and ends the time of dreaming. I expected it to end the series, and we did get some answers as to how this universe fits into our own. However, the story is far from over. It could maybe be nicely wrapped up in one more book. It could also, with the new plot opened with the last book, continue on into a whole new second series. I don't think it will/should. There were many loose ends tied up by the end of this book and just a few more threads are dangling.
(Ah! I see that since I last checked a new book was announced. The 5th and final book in the series is do out on December 5, 2017.)
I'd already planned what to say in this review but it is still an AUDIBLE 20 REVIEW SWEEPSTAKES ENTRY

A convoluted story in my opinion. I've seen authors mix science fiction and fantasy well but this is messy. Too many moments of enlightenment and conspiracies that span three generations? No one is that good a strategist.