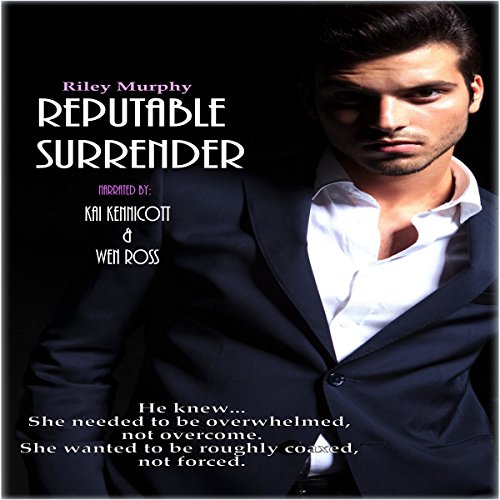 With the option of small-town living, a white picket fence, and a Dom husband long since off the table, Laren has one goal in mind: To marry her career so she can pay off her sister's debt. She's one deal away from landing a corner office in The Big Apple that will help her reach that goal when Michael Kavanaugh storms into her life. Although she's tempted, she's been sidetracked by a man before, and vowed never again. Michael Kavanaugh's life motto? Some men were made to tame only one woman. After years of earning the hard-won nickname "The Reputable Dom", Michael is ready to throw it all away. He'll become the opposite of everything that name suggests for a shot at owning the strong-willed business woman who clings to her secrets with an iron-fist. He's determined to do whatever it takes to unearth her mysteries and make her change her mind about him, even if it means he has to ditch his stellar reputation in order to claim her - by very disreputable means.

What listeners say about Reputable Surrender

Where does Reputable Surrender rank among all the audiobooks you’ve listened to so far?

Reputable Surrender by Riley Murphy was a great book. Lauren is a woman who decides to marry her career when she can't find a Dom for her. She needs her career to pay off her sister's debts and make sure her sister and nephew don't lose the roof over their head. She meets Michael right before landing the job that could land safety and security for her family. I loved reading Michael and Laren's story. I can't wait to read more by Riley Murphy.

What made the experience of listening to Reputable Surrender the most enjoyable?

Both the story and the narrators were really good.

What was one of the most memorable moments of Reputable Surrender?

I loved the interactions between Michael and Jude.

What about Kai Kennicott and Wen Ross ’s performance did you like?

They bring the story to life better than my imagination can.

The scenes near the end that starred Jo were particularly moving.

Absolutely,It was a great book and anyone who loves a hot read should definitely read this book!!!

Micheal because he is hot!!!

I have and there is no comparison each performance is exceptional and brings each book to life in their own way!!

I absolutely did itbwas too hot to stop in the middle of it!

The storyline is cute and decent but the recording. Its awful. They sound like they are in a echoey room, there are pauses so long even when you speed it up to 1.5 x its unbearable. Kai and Wen are way better than this, neither changes their voice for other characters and it just dragged on.

Excellent read with plenty of different emotions. Wen and Kai are a perfect combination of narrators to put me right into this story!

Good characters, but not in the traditional sense of Dom/sub stories. The plot meanders a bit before becoming a bit of a mystery story with a rescue. Feels a bit like the author had to submit a certain number of pages so she had to drag it on a bit.
Narrators also had lots of pauses and stops and it made it hard to understand which character was speaking as they didn't take on voice changes.
I made the purchase on sale, so I was okay with it. Had I used a credit or paid full price, I wouldn't have been generous.