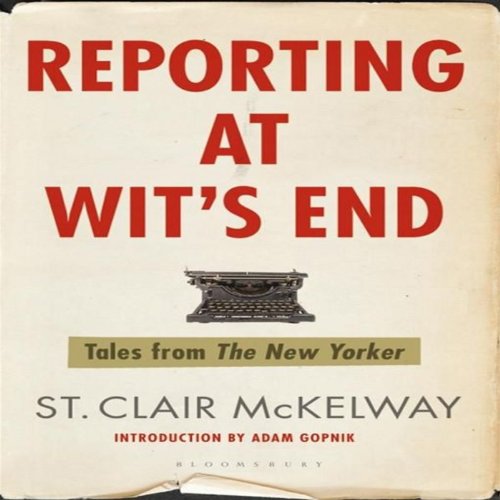 "Why does A. J. Liebling remain a vibrant role model for writers while the superb, prolific St. Clair McKelway has been sorely forgotten?" James Wolcott asked this question in a recent review of The Complete New Yorker on DVD. Anyone who has read a single paragraph of McKelway's work would struggle to provide an answer.

His articles for The New Yorker were defined by their clean language and incomporable wit, by his love of New York's rough edges and his affection for the working man (whether that work was come by honestly or not). Like Joseph Mitchell and A. J. Liebling, McKelway combined the unflagging curiosity of a great reporter with the narrative flair of a master storyteller. William Shawn, the magazine's long-time editor, described him as a writer with the "lightest of light touches". His style is so striking, Shawn went on to say, that "it was too odd to be imitated".

The pieces collected here are drawn from two of McKelway's books - True Tales from the Annals of Crime and Rascality (1951) and The Big Little Man from Brooklyn (1969). His subjects are the small players who in their particulars defined life in New York during the 36 years McKelway wrote: the junkmen, boxing cornermen, counterfeiters, con artists, fire marshals, priests, and beat cops and detectives. The "rascals".

An amazing portrait of a long forgotten New York by the reporter who helped establish and utterly defined New Yorker "fact writing", Reporting at Wit's End is a long overdue celebration of a truly gifted writer.

What listeners say about Reporting at Wit's End

Less would have been more

As a longtime New Yorker subscriber I have always prized the magazine for its great lineup of writers, past and present. So when I heard of this collection I was excited to make the acquaintance of a writer I was only dimly familiar with. Some of the stories in this collection are witty and wonderful. The incompetent counterfeiter. The various petty criminals, arsonists, and crackpots. But there are a couple of longer stories that mar this collection. Partly because there is no editor to explain the context of these stories, both about the author himself (one a story about his accusation that Chester Nimitz was a traitor and the other a meandering story about a possible kidnapping/murder plot which was most likely either a prank or a delusion) but also because it is harder to really understand the point the author was trying to make. Anyway. Leaving these longer stories out would have left the book a couple of hours shorter, but not appreciably less fascinating. McKelway seems to have been most at home with the oddball criminals and either full blown lunatics or at least quite eccentric characters of the era. There is a real fondness for exploring these troubled souls and, especially in the hapless counterfeiter story, it is hard not to feel some genuine sympathy or even liking for them. Also, McKelway was true to the New Yorker tradition for seamless prose. Even the shorter pieces bear the mark of a master. The only other complaint, a mild one surely, is that the narrator is good at description and narrative, but when assuming a character's voice, especially the female characters, his narration begins to falter badly. An enjoyable book but you may want to fast forward some.