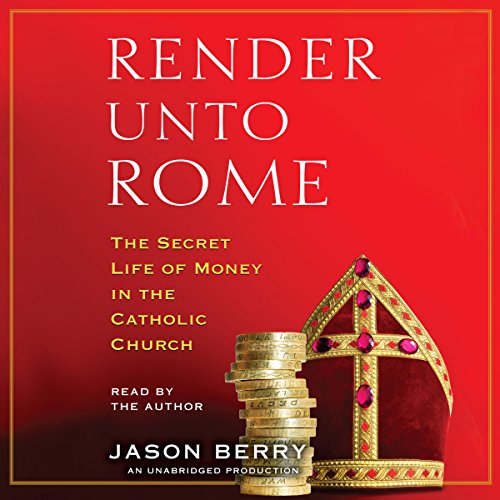 The Secret Life of Money in the Catholic Church
By: Jason Berry
Narrated by: Jason Berry
Length: 17 hrs and 59 mins
Categories: Non-fiction, Politics
4 out of 5 stars 4.0 (1 rating)

An investigation of epic finanical intrigue, Render unto Rome exposes the secrecy and deceit that run counter to the values of the Catholic Church.

The Sunday collection in every Catholic church throughout the world is as familiar a part of the Mass as the homily and even Communion. There is no doubt that, historically, the Catholic Church has been one of the great engines of charity in history. But once a dollar is dropped in that basket, where does it go? How are weekly cash contributions that can amount to tens of thousands of dollars accounted for? Where does the money go when a diocese sells a church property for tens of millions of dollars? And what happens when hundreds of millions of dollars are turned over to officials at the highest ranks, no questions asked, for their discretionary use?

The Roman Catholic Church is the largest organization in the world. The Vatican has never revealed its net worth, but the value of its works of art, great churches, property in Rome, and stocks held through its bank easily run into the tens of billions. Yet the Holy See as a sovereign state covers a mere 108 acres and has a small annual budget of about $280 million.

No major book has examined the Church’s financial underpinnings and practices with such journalistic force. Today the Church bears scrutiny by virtue of the vast amounts of money (nearly $2 billion in the United States alone) paid out to victims of clergy abuse. Amid mounting diocesan bankruptcies, bishops have been selling off whole pieces of the infrastructure—churches, schools, commercial properties—while the nephew of one of the Vatican’s most powerful cardinals engaged in a lucrative scheme to profiteer off the enormous downsizing of American Church wealth.

"Money dominates the third of Jason Berry’s important books about the Catholic Church. Render unto Rome probes deeply into the culture of the church. To painful questions about money and sex, Berry finds, the response of the church is always the same – secrecy and silence." (Thomas Powers)
"The Catholic Church wants us to believe that it can reform itself from within. This book shows that it simply can’t. If you are an entrenched member of the hierarchy, you are not going to like this book. If you are a Catholic who believes that truth will lead to change - and that the Vatican needs to change, and change fast - Render unto Rome is your catechism." (James Carville)
"A captivating read, Render unto Rome is an astounding revelation of the church's financial system, and required reading for those who donate to the church or are interested in the ongoing effort to restore the credibility of the church and its hierarchy." (Sister Joan Chittister, OSB)

What listeners say about Render unto Rome

Exploitation Of The Most Vulnerable

In Render Unto Rome, Berry writes about money; but as with his previous books, is not so much a book about ‘what happened’ but why.
What happened reads more like a thriller than investigative journalism.
But Render Unto Rome, like Berry’s other books, the refrain remains the same: money, sex and power; but mostly POWER.
Berry continues to educate the average catholic who may not have been physically raped, but have been financially and spiritually raped by the Vatican.

Exhaustively researched, insightful analysis and personally and spiritually powerful.
However, the real importance of this book is laying open the continuing struggle for power and the struggle for what the Roman Catholic Church will look like for generations to come.

While the focus is mostly on the The Legionaries of Christ, the book charts a trend toward a more cultic Roman Catholicism, a personality driven Roman Catholicism, and a decades long shift of power from the curia and religious orders towards personal and lay apostolates like the Legionaries, Opus Dei, Communion and Liberation, Regnum Christi, and Focolare (there are significant differences between these apostolates, but they are all neo-conservative, and in Pope Francis’ words- are loosely bound by their "ideologization" and "exploitation" of the traditional Latin Mass and all things anti-Vatican II.

But the most important revelation is not the mind boggling amounts of money and the hubris of the hierarchy, but the exploitation of the most vulnerable-those for whom the church is supposed to exist to ‘save’.

As an active Catholic Priest for the past 56 years this book is unbelievable.

It reports an account of lots of decent Priests and People and so many others in high places living in a world and a value system far removed from the teachings of Jesus in The Sermon on the Mount!

good book but hard to follow at some points.

Good book with a lot of detail and examples. There are some parts where it's hard to follow who is who since there are so many characters. Overall good listening!

listened for 12 hours and gave up. Too much detail for a person with casual interest in the topic. Story doesn't seem to be going anywhere.

Too close to home

If you could sum up Render unto Rome in three words, what would they be?

What does Jason Berry bring to the story that you wouldn’t experience if you just read the book?

A deeper view of the financial effects of the pedophile scandal.

I have no idea

This book is a crucial contribution to the current debate on the ethical soundness of the institution of the Vatican, its eloquence aided by the presentation: the author reads it. Jason Berry takes us through the complexities of the finance of the Roman Catholic Church in the USA, in particular, but his investigations have spread more widely, and his reasoning is always carefully made. Yes, this does sound like a thriller, but it cannot cause anything but sorrow to the devout, whom truly deserve better. A brilliant piece of investigative work, made absorbing by a careful and fluent reader: highly recommend.