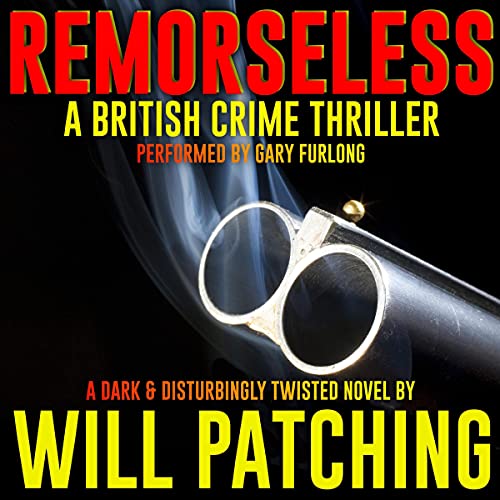 By: Will Patching
Narrated by: Gary Furlong
Free with 30-day trial

A killer paroled. A tormented profiler. A blood-soaked quest for revenge.

Doc Powers is one case away from a complete breakdown. Grief-stricken over the death of his wife, his reliance on booze and drugs fills his life with startling hallucinations. As he battles his demons, his efforts to stay coherent fail to keep a cunning psychopath behind bars.

With a bloody trail of death spreading, Doc fears both he and his colleague are next on the killer's hit list. Fighting the visions that threaten to consume him, he must tap into the profiling skills of his past to put an end to the parolee's murderous rampage.

Can Doc overcome his demons and match wits with a maniac before he becomes the next victim?

Remorseless: A British Crime Thriller is the first book in the pulse-pounding Remorseless trilogy, which is not for the faint of heart. If you like edge-of-your-seat suspense, sadistic killers, and heroes scrambling to stay a step ahead, then you’ll love Will Patching’s spine-chilling novel.

Buy Remorseless to plunge into an unflinching thrill-ride today!

"Had I read Will Patching's novels while still a serving officer, I'm sure his insights into the workings of their minds would have helped me understand the motives and actions of these people."

What listeners say about Remorseless: A British Crime Thriller

I'm hooked on any UK crime stories so I thought I'd give this one a try. It's a winner! Engaging characters, gritty crime, and wonderful narrator.