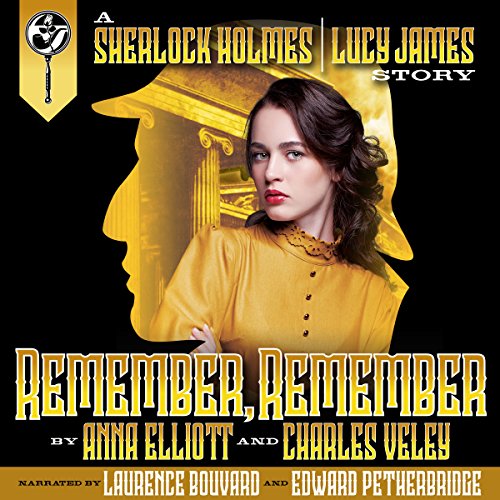 Narrated by Laurence Bouvard and Edward Petherbridge. A lovely American actress awakens in London on a cold morning in 1897 - lying face down on the concrete pavement outside the British Museum. She has no memories. She does not even know who she is, although she has a vague recollection of the name Sherlock Holmes. What she believes is that she has may have just killed someone, and that someone is definitely trying to kill her. As she searches for clues to her true identity, she will learn that she is not the only target. Unless she can defeat her evil adversaries, the people most dear to her will die.

What listeners say about Remember, Remember

Ii takes a Sherlock to be a sherlock!

Anywriting that keeps adding to the tales of Sherlock
Holmes I will try! This was an enjoyable addition to the mistyque. The writing is very close to the rhythm of the primary stories. The readers are very good although this Sherlock appears to whisper which I don't enjoy as much. I am heading for the next book in the series. Hopefully it is similarity as good.

Very well narrated and a plausible plot. Anxious to move on to the 4th novel in the series.

Another great version of daughter of Sherlock

the story was well written and the voices were very good. they didn't stumble and was smooth. it was nice to listen to. had a little bit of everything between action and love. it was very well played out.

The authors have written a fantastic novel, full of intrigue and suspense! The narration is superb, bringing the characters to life!

I enjoyed the first two books in this series; not so Book 3. About a third of the way into the story, I seriously considered returning this book. I decided to keep going, though. Not worth it. There were moments when I thought it was going to pick up and then the story became dull again. Another reviewer stated that it was like listening to a Nancy Drew story. I have to agree.

I thoroughly enjoyed the first two books in this series. They were very like the original Holmes stories. This work is a horse of a different color. That is not meant as a slight. This book was a lot of fun and I enjoyed reading it. There are some nice twists and turns in the plot etc., but it comes off as as a much a romance novel as a detective work.

The voice of Ms. Laurence Bouvard as the narrator is the best I've heard, through hundreds of Audible books. She's outstanding. The story is good as well but not great. As much as I wasn't too excited about the idea of Sherlock having a long lost daughter, the authors pull it off pretty well, without the character acting too similar nor too different. I really liked the story for most of the book, but it ended rather abruptly. Without giving it away, it was somewhat anti-climactic. My biggest problem with the book is the lack of involvement of Dr. Watson, who's basically just a babysitter in this story. Still, the excellent voice of the narrator made it so I didn't mind that Lucy is 95% of the book.

Narration for Lucy was Awful

Mr. Petherbridge's voice for Lucy is brilliant for the first two books. I could not finish the third book because of the narration provided by Ms. Bouvard for Lucy's voice. I felt I was listening to a Nancy Drew novel.

Not as good as I hoped

I really looked forward to this book, particularly as I had so enjoyed the previous two. However, the writing of this story was not at all up to the same standard and seemed to lack maturity. Sloppy repeated metaphors (I got really tired of hearing about icy grips on her heart or spine) and Americanisms (no Upper Class English woman would know what a "stoop" was, let alone tell her servant to clean it) did not help. The character of Lucy James and her language was all too modern, and distanced the entire novel away from the original Conan Doyle - which I felt the previous two books had captured very well. The idea of Lucy asking Sherlock Holmes for advice on love was excruciating though and that should never have made the cut. I did, however, enjoy the basic plot, even if was now Sherlock-Lite.

It would need tighter writing.

What didn’t you like about Edward Petherbridge and Laurence Bouvard ’s performance?

Edward Petherbridge was as excellent as ever, although sometimes it did seem as though he had recorded it separately to Laurence Bouvard. I cannot say the same for Laurence Bouvard. As an American, she came across well, but the same cannot be said for her accents, which at times had me laughing out loud. I do understand that the cockney accent is not an easy one for some Americans, but surely someone could have helped her get the crucial vowel sounds right?

Yes, I might, but the script would need to be much tighter and go back to the original two novels in style. The story itself was rather fun and with the right actors playing the roles it would make a good film.

Overall, this book had such a lot of potential, but it was a disappointment when compared to the previous two novels. Perhaps if I had not listened to it as an audio book I would not have felt quite so strongly.

If you enjoyed the first two books, please don’t buy this

If you enjoyed the first two books, please don’t buy this: it is not only nowhere near as good, it genuinely spoils the experience of the previous ones.

Apart from using the same characters (with different voices mostly) it is totally different and, sadly, far inferior.

It’s a romantic cosy mystery with overtones of wish-fulfilment by the author. The main character goes around hugging ‘Uncle John’ (Watson), Holmes and Mrs Hudson.

At one point, the main character tells Holmes off for being inconsiderate and makes him buy Mrs Hudson roses. This is after Mrs Hudson shouts at Holmes it’s like the author has no idea of the social Norma at the times nor the original book.

This book like a children’s version of the originals - language, style and storyline all together.

The narrator makes it worse by being unable to do English accents and then developing a cold halfway through the book.

I stuck it out for 6 hours but couldn’t finish.