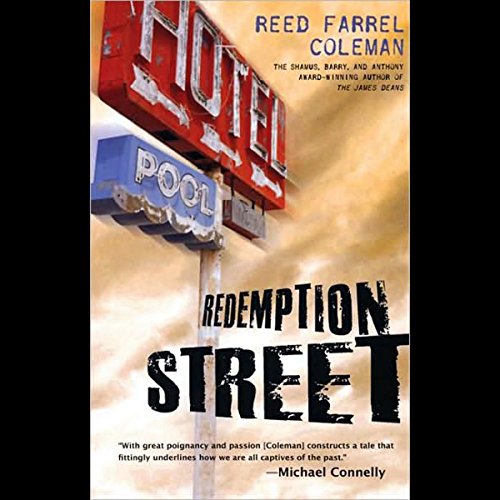 In Redemption Street, retired NYPD officer and newly minted PI Moe Prager travels up to a decaying Borscht Belt hotel to uncover the truth behind a decades-old fire that killed 17 people, including his high-school crush. Away from his beloved Brooklyn and out of his element, Moe finds that the locals aren't as eager to dredge up the painful past or to stir up the embers of that long-dead fire as he seems to be.

In fact the cast of locals - a washed-up comedian, an ambitious politician, a corrupt cop, a pint-sized Hitler, the leader of a mysterious Jewish cult - seem rather intent on doing their level best to make certain the circumstances surrounding the fire stay buried along with the charred bodies of the dead. Moe Prager's gift, however, is coaxing secrets out of the silent past. But will the truth lead to Redemption Street or his own dead end?

"Prager's dogged pursuit leads to a satisfying and logical solution, while demonstrating Coleman's gift for blending a classic whodunit with a gritty, realistic procedural. Prager is a fascinating creation, believably grappling with his status as an unaffiliated and unobservant Jew, with ample room for greater growth." ( Publishers Weekly)
“With great poignancy and passion [Coleman] constructs a tale that fittingly underlines how we are all captives of the past.” (Michael Connelly)

What listeners say about Redemption Street

Reed Farrel Coleman captivates me. Moe Praeger's a wonderful character, he wanders through tight plots, the supporting cast is always interestingly dimensional and AndyCaploe is a gifted reader. So... Why the "but"? Coleman got a tad preachy in this work. Praeger's internal monologues driven by the looseness of his cultural moorings are more than just a subplot in Redemption Street. Yeah... I understand the book's name and its metaphorical cement to the motivations which explain serious plot twists. But... but... Oy! So much guilt I don't need!

Careful... start with the earlier book in the Praeger series to understand the dark undertone of Praeger's personal culture. I did, now I'm going to find the next in the series. Hey... I told you... VERY GOOD but... The but doesn't keep me from recommending Redemption Street and the additional enjoyment of Andy Caploe's characterizations.

As it happens, I read "The James Deans," which is the third book in the Moe Prager series, before reading this, which is the second. I had enjoyed the other, but this one is even better and fills in some holes in the complicated set of personalities and relationships in Moe's life. Coleman's characters are multidimensional, neither entirely evil nor wholly angelic, which not only makes them more realistic but also makes it harder to figure out who is the real villain. I felt the narrator was well-suited to the voices of the characters, also better than the other one.

The plot is also complex and will keep you guessing up until the very end. Coleman is a master story-teller and, even though I felt that, at times, he delved too much into the biographical history of his characters, in retrospect, nearly all these details become important later on. Coleman is a much better mystery writer than many more well known authors. I look forward to the subsequent episodes in this series as well as others from him.

The narrator is great with all the different characters, especially the old Borscht Belt comedian.

A disappoint - save your money.

The best part of the book was the opening 15 minutes. It went downhill from there. Every tired euphemism is included. The ending is inconceivable. Thus far this is the worst book I have ever had on Audible. Don't bother with this turkey - try something else.