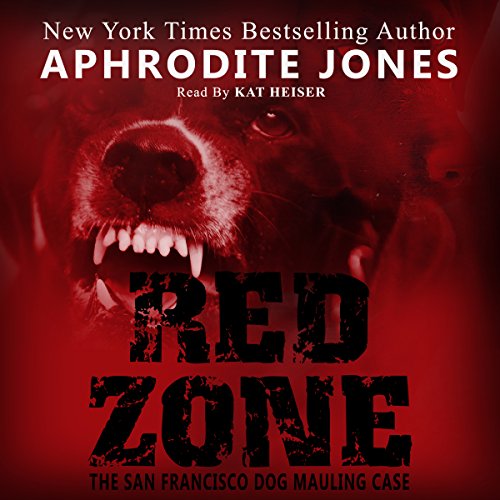 It was the story that shocked the nation and captured headlines for more than a year. In January 2001, Diane Alexis Whipple bled to death in the hallway of her ritzy Pacific Heights apartment building when she was mauled by two Presa Canarios, a vicious breed of attack dog imported from the Canary Islands. After the lethal attack, animal experts testified that the dogs could not have been stopped, explaining that they had entered a frenzy called the "Red Zone".

Now, New York Times best-selling author Aphrodite Jones shows that the mauling was only one part of a frightening story involving obsession, bestiality, and illegal dog rings. The dogs belonged to Whipple's neighbors, lawyers Marjorie Knoller and Robert Noel, who had been keeping them for a leader of the notorious prison gang the Aryan Brotherhood.

Jones takes us deep into the bizarre world of Paul "Cornfed" Schneider, a Hannibal Lechter-type character who actually owned the dogs, Bane and Hera. She explains how Noel and Knoller, after being warned about these killer dogs, brought them to the heart of San Francisco, leading the dogs eventually to murder an innocent next-door neighbor. Jones also reveals the shocking L.A.-area whereabouts of the offspring of Bane, the dog most directly involved in the mauling.

Jones is a masterful investigator and writer who has interviewed the complete cast of characters - including Robert Noel and Marjorie Knoller during their imprisonment - and can now tell the full story of what happened in that apartment hallway. Red Zone is a riveting pause-resisting account of this news-making story that takes us deep into the relationship between man and animal.

What listeners say about Red Zone

Would you consider the audio edition of Red Zone to be better than the print version?

I didn't read it, so I couldn't tell.

The dog mauling itself was a compelling story.

There were way too many mispronounciations in this narration. Pronouncing Aryan, a very common term in this book (Aryan Brotherhood), as Orion was really distracting when you don't see the word in print. There were many Northern California place names that were also mispronounced, and other common words that were mispronounced.

That the author researched many aspects of this story and that it wasn't just a retelling of the newspaper articles related to this incident.

The narrator has a very pleasing voice, but her repeated mispronunciation of common and crucial words in this story was quite annoying. Was there no editor here?

This book definitely kept my interest throughout the 10 plus hours.

This is a case that interested me, so I was pretty excited to see a book on it. I decided to give it a go even though another reviewer made it sound like the narrator probably couldn't pronounce her own name and I'm glad I did. Yes, the narrator makes some really odd pronunciation mistakes. How on Earth does one pronounce Orion instead of Aryan for instance? But honestly I knew what she was trying to say, and at least she was consistent. It's not as if she's going back and forth between pronouncing it one way then the other. So yes, I did end up taking a star off but just one. Besides the pronunciation I thought she had a lovely voice, and I hope she narrates something else I'm interested in at some point. Also, the story itself is fairly well told, even though I got a little confused over which jailhouse ex girlfriend they were discussing at times. But full disclosure: I'd just had surgery and was on painkillers so that could have just been me.

As an aside, since this book is a little on the older side, you might want to look it up online once you're done with the book so you can get an update. I'm just going to put that out there.

This is a well-told story that really develops the sick lawyers and others who misused some dogs in a terrible way.
Kat, the narrator, has a lovely voice, but her mispronunciations of terms like Aryan as "Orion", and a few others took a little away from the story, but overall it's a good listen.

throughout this entire book no one involved in the recording process realized the natrator was mispronouncing several words! Instead of refering to the white prison gang AB as AIR-EE-UN brotherhood sounds like she's saying OR-I-ON brotherhood! and instead of Apel-It court to refer to first step after a conviction to reverse a lower courts decision. She says Apple-at court. maybe it's a tomAto/tomOto situation but it drove me CRAZY! these are only 2 examples of this awful narrator. The other was the story itself. The story goes off path several times and gives a lot of info about what I thought were irrelevant. like the second or third chair DAs wedding plans! who cares!

Overall enjoyed the writing and narration, but the narrator mispronounces words throughout the entire book and it is distracting.

I enjoyed the book but the narration was hard to listen to at times due to several glaring mispronounciations.

The story was interesting enough but the horrendous pronunciation was so distracting I could not fall in to it as I would have liked. "Orion" vs "Aryan" is just unacceptable. I'm shocked this got by the author.

What other book might you compare Red Zone to and why?

Narrator could learn to pronounce key words in the story.
Aryan (as in Brotherhood) does not rhyme with Orion (as in the star system)
Appellate (as in Court) does not sound like Apple Ate
The Mexican Mafia is never pronounced "L M"
Several times I had to pause the story to guess what the narrator was trying to say. I'm not an internet troll & I don't like internet nastiness, but when I actually paid to purchase a product, (i.e. this audible recording), I think the author should know that her prose is being butchered.

Was Red Zone worth the listening time?

Once I figured out what the narrator was saying, then a definite "yes" the story was brisk and interesting.

Get A New Narrator

The number of mispronunciations of words is atrocious. The frequency of which those words appear in the text make what could be overlooked into a annoying, negative experience. It’s more than “weird pronunciation” as I have seen it characterized in another review. The Aryan Brotherhood is pronounced “A-Ryan” is this book. What’s more, common words one would relate to white supremacy (including the word itself) this far are those misspronounced. WTF