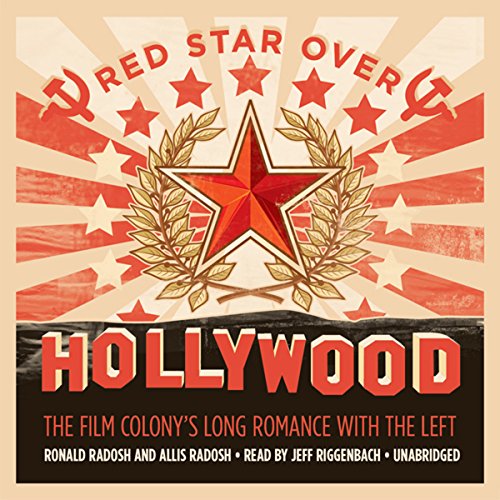 Until now, Hollywood's political history has been dominated by a steady stream of films and memoirs decrying the nightmare of the Red Scare and how it victimized political innocents. But Ronald and Allis Radosh tell for the first time the “backstory” behind this myth. They show how the Soviet Comintern targeted the film capital in the late 1920s, taking us inside the cells and discussion groups that Communist Party members formed, the guilds and unions they tried to take over, and the studios they aimed to influence.

The authors demonstrate that many of the screenwriters who later became part of the Hollywood Ten in fact succeeded in using film as a propaganda medium on behalf of the Soviet cause. While others were lionizing them as blameless victims of American nativism and paranoia, the Hollywood Reds themselves were beset by doubts and disagreements about their disloyalty to America and their own treatment by the Communist Party. Abandoned by their old CP allies, they faced the black list alone.

Getting behind the denial and apologetics, Ronald and Allis Radosh tell the real story of one of the most discussed but least understood episodes in our political history, whose long half-life continues to influence the equally turbulent cultural politics of today.

"Ronald and Allis Radosh give us a sobering, straightforward, scrupulously researched account of the Communist Party's actual goal." (Tom Wolfe)
"A thoroughly researched investigation of the communist controversy in Hollywood that has divided America for more than half a century." (John Patrick Diggins, Distinguished Professor of History, City University of New York)
" Red Star Over Hollywood is a cool, objective, well-researched and highly readable study of the effects the HUAC." (Richard Schickel)

What listeners say about Red Star over Hollywood

Dalton Trumbo wrote that the HUAC committee and the actions of the Communist Party USA created only victims. The Radoshes have here a well researched well told history about a minor but significant period of US history.
Well read, a little slow getting started, Red Star Over Hollywood establishes the main characters, then follows them through the years to the present.
I think if one has a favorite or hero from the Blacklist period---read this. If anyone thinks they know who the villains were--read this.
If I have a criticism, it's the one I have about most books about this subject. For the studio artists and workers, some Communist and some not, none famous, who were in the 1945 Warner Brothers Strike, the blacklist never ended. They never worked in the movie business again.
Good book. Worth reading.

It Gets Better as it Goes Along

For those of us who love that spy-befouled time of post-World War II this is an interesting read. The audio book is divided into three parts with the first being the least interesting. The narrative gains momentum, however, and ultimately I was sorry to have the book end. I wish the authors had given lip service to the spy trials which were going on before and during the Hollywood investigations. Except for the slow startup, the authors do a worthwhile job and its worth the listen. Particularly good is the authors' new material by and about Dalton Trumbo. It's interesting to note that the Hollywood "blacklist" was an contrivance of the studios and not the government.

the performance was kinda stale but the story is very compelling and educational. This story filled in the gaps left by propaganda masquerading as legend.

Great book shows how widespread the Communist influence was/is in the US. Funny how Commies only admit being evil totalitarians to each other and claim to be moderate liberals to others.

It's not that the story of Communism in Hollywood is a boring one, it certainly isn't, but this particular take contains some of the dullest writing on the subject I've ever seen.
Acronyms abound, and instead of concentrating on the whys of notable incidents, including the Moscow Show Trials and their influence, and the reasoning behind them, I found myself constantly having to stop and research to discover the significance.
Perhaps this would be a good read for people who are already well-versed in Communism lore, but it definitely falls flat for a newbie to the subject.
It also doesn't help that the narrator fumbles and drawls his way through the already turgid narrative in a dreary, emotionless monotone.
I am assured that it gets better in the final third, but I'm afraid I shall never find out as, keen as I am to learn more on the subject, I have had to stop listening. I shall return this audiobook and try to find something with more vitality. I urge any prospective listeners to do the same.