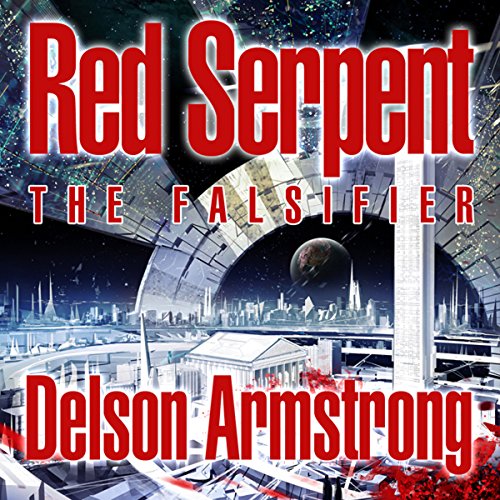 After years of exile, humanity has banded together, waiting for his fateful coming.

On Earth, the evil vampire overlords prepare to do battle with him.... Both races, enemies to each other, seek to befriend him.... For they know his power: He is the Falsifier.

In the far future, the last free humans have fled to a massive space station in Earth’s orbit. On the planet below lurk their oppressors: a race of vampires who seek to breed and harvest them like animals.

Orphaned as a child, Alex grows to manhood in the shadow of his legendary father, who united the scattered remnants of humanity. But as he takes up his father’s banner, he uncovers a frightening secret about himself: he is the Falsifier, fated to bring down the Vampire Empire. As he struggles with his destiny, the vampires abduct him in a surprise raid. With humanity’s survival at stake, Alex must find—and fight—his way back and take his place in history.

What listeners say about Red Serpent: The Falsifier

I know what you're thinking. Another book about vampires? Really? Don't knock it till you try it. The author sets vampires against the humans in an epic battle for control of the earth. It's not your average Twilight.

Being a fan of radio drama, I liked how the story was fully produced, including sound effects and different voices for each character. I thought it made it easier to follow and enjoy.

Personally, I found the complex mythology and philosophical discussions even more interesting than the story itself. The author presents a fascinating alternate world in which a perfect race came to earth and taught humans about technology and religion. Finally, I found the perspectives on existence fascinating. The author shows that the universe only exists in our minds.

A deep plot with surprising twists and turns. A love story gone bad. Two empires struggling for ultimate control in a war that could destroy all life. A compelling read.

I never rate stories much less review my purchases. While the concept is good, the writing is frankly garbage and the voice actors leave much to be desired.