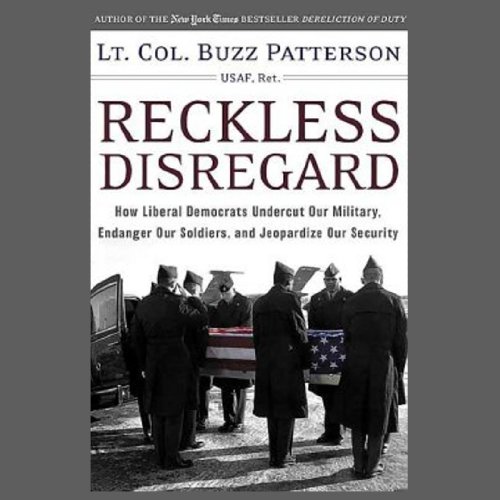 In this incendiary, best-selling polemic, conservative commentator Robert "Buzz" Patterson argues that the U.S. military has been damaged by its Democratic leaders.

Patterson, an advisor for Bill Clinton and a retired Lt. Colonel in the Air Force, argues that Democrats have weakened military morale by allowing gays to serve in the armed forces while slashing military budgets. The targets in Reckless Disregard include former President Clinton, who was too preoccupied with the Monica Lewinsky scandal to handle the threat of Osama Bin Laden, and the anti-war record of Senator John Kerry.

Narrator Joe Geoffrey’s gruff baritone brings the proper amount of gravitas to this strongly worded defense of traditional military might.

Reckless Disregard shows how liberal Democrats are wasteful of American military lives, and have committed themselves to policies that are inimical to America's national security. This is a frontline soldier's report on how liberalism and national security don't mix.

What listeners say about Reckless Disregard