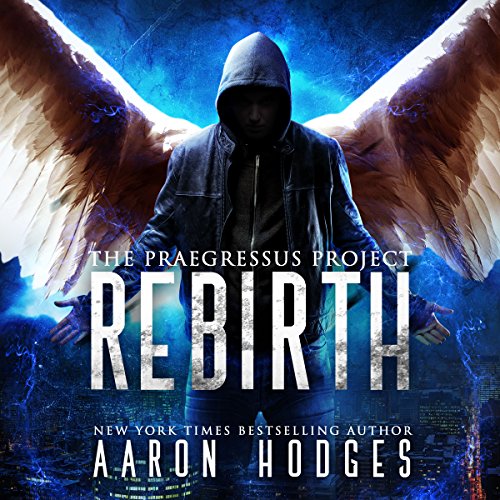 The United States have fallen. A new power has risen in North America, but now, a terrifying virus is spreading across the countryside. Once infected, people change, mutating into superhuman creatures known as the Chead. Wherever they walk, death follows. Desperate to defend its citizens, the government launches the Praegressus Project - an experimental program to enhance the human race.

Elizabeth Flores was just a normal girl - until the Chead slaughtered her parents and made her a fugitive. With winter approaching she seeks refuge in the city of Sacramento, but the hunters are waiting. Abducted off the streets, she's spirited away to a facility deep in the Californian mountains. There, Liz wakes in an iron cage - and she's not alone.

In the opposite cage, Christopher Sanders stands wrongfully accused of treason. Along with Liz, he has just become a volunteer in the Praegressus Project. Stripped of their rights, they will soon learn there is little separating humanity from the monsters they seek to destroy. The two must work together if they want to survive, but even then, their chances are slim. Of course, only the lucky get to die.

Blending the insane experiments of Stranger Things and the haunting dystopia of The Hunger Games, fans will love this thrilling new series. Discover a future where the powerful rule without mercy, and nothing is ever as it seems. With hints of YA Dystopia, Genetic Scifi, Urban Fantasy and just a touch of Romance, the Praegressus Project truly has something for everyone. Enter a new world with New York Times Bestselling Author Aaron Hodges.

What listeners say about Rebirth

The science in the plot is very realistic, Every experiment is described as if it's real. I was totally hooked from the beginning, to the end

Interesting start for a new franchise

What made the experience of listening to Rebirth the most enjoyable?

If you like dystopian futures with strong elements of 'rooted' science fiction, (by which I mean that the civilization's tech level fell and is slowly being rebuilt, but this story focuses on a desperate government looking for weapons to defend themselves.

Which character – as performed by Michael Stene – was your favorite?

I personally loved the character of Sam, written as a descendant of Native Americans and seemingly unflappable in the face of any setback. So I'll give points for Hodges for expanding the cast beyond the typical white boy & girl. In fact, most of the characters were POC.

Near the end, one of the characters is hurt badly, and another sacrifices themselves in an attempt to save the first.

I'd love to hear more about the history of this world, where the West Coast states of the US seceded from the US and fought another civil war, wherein DC was destroyed and the United States government crippled. It was such great worldbuilding, especially since it was all given through the eyes of the two protagonists. Although, to be honest, the romance wasn't necessary.

No less then excellent !!!

First: I want more.
Second: what a beautiful beginning for an excellent series.
Third: Aaron Hodges writing style is beautiful, every character in this excellent story is felt and understood, truly beautifully done !
And coupled with Michael Stene narration a beginning of an Audiobooks series masterpiece was born.

I full heartedly recommend this audiobook!


Even so that I got a sample of this audiobook for free, I believe that I could not have been more honest with this review.

I've tried to get through this and can't!

With audiobooks, the idea is to capture your listener's mind and to keep them engaged and entertained. The two ways to accomplish this difficult task are through good writing and a great performance (narration). After nearly a month of trying to get through this book, I've finally given up!

The difference between a good narrator and a bad one, isn't necessarily his/ her ability to read the book, rather to perform it. I didn't feel connected to this story. I got close to 18 chapters in and I was bored the entire time.

I'm typically a fan of this genre and after reading the summary was excited to listen, unfortunately the disappointment set in pretty quickly. I wanted to give the author and narrator the benefit of the doubt (because I received this copy as a gift for an honest and unbiased review), but it got to a point where I'd be listening for five minutes and all I could think about was how bored I was.

Great start to a new series!

I was really interested in the premise for this book, which is why I decided to give it a try. I will admit, the parts of the story around the experiments on children were disturbing, but the story as a whole was really good. I found myself sucked right into this book and finished it rather quickly, much to my dismay. I wanted the story to continue. At 6 hours in length, it flew by and I was left wanting more. To me, this is a sign of a really good book. Now the 2nd book needs to hurry up and get released!

A very good book. Genetic testing at it's worst. I received this audio book for free at my request and voluntarily reviewed.

I'm stuck between wanting to give this book a standing ovation and rocking in the corner in horror, perhaps the second feeling means I should go with the first.

Abducting children, putting them through horrific tests and then changing their genetics is -and should be- horrific. But the world and character building in this book is so well done that I can see everything happening in my head (a mixed blessing) and I felt horror, sadness and anger along with the characters.

I received a free copy of this book from the author and/or narrator and/or publisher and I voluntarily wrote this honest review.

If you found this review helpful would you please take a moment to click yes below.

My first read from author Aaron Hodges was attention-grabbing and enjoyable. The first book in the Praegressus Project, I own both the Kindle & Audible editions so was able to read along as the narrator read the book.

I love this book. I had to listen to it again as soon as I finished it the first time. This book is based on some terrible truths. Government Doctors/Scientists have done unspeakable things in the past, and present. In 1950-52-ish, in the US, Gov. Doctors/Scientists fed sugar coated corn flakes to orphans in orphanages around the US. The corn flakes were also dusted with plutonium. They were monitored till all the kids died of complications from radioactive material. There are many other examples of this throughout history. On the bright side, I'm sure Aaron is going to pull this story out for a very happy ending for those that survive. I am now going to procure the second book in this series, provided it has been written already. I highly recommend this book. Now for the obligatory: This book was given to me for free at my request and I provided this voluntary review.

Rebirth
The Praegressus Project, Book 1
By: Aaron Hodges
Narrated by: Michael Stene
This is an audible book I requested and the review is voluntary.
This is a suspense-filled book that kept me on the edge of my....tablet. lol
The world building was good and I don't want to live there. It was an intense book where scientist were experimenting on kids. If you like Max Ride by James Patterson then you will like this. Similar but different enough to stand alone. Can't wait to see what happens next!
The narrator kept the feel of the book flowing well. Great job!

I enjoyed this although it did mind me of a certain other famous writers take on this subject.
The characters and overall premise were good and i found myself drawn into then quite easily.
This is Book 1 so a lot of setting the scene means this feels a bit shy if action until the end and you soon find the audio finished quite quickly.
Narration was done quite ably and i was very happy to listen along.
I would carry on my listening as further audios would have more action and excitement ahead.
This audiobook was requested and i have decided to leave my thoughts on this for everyone.