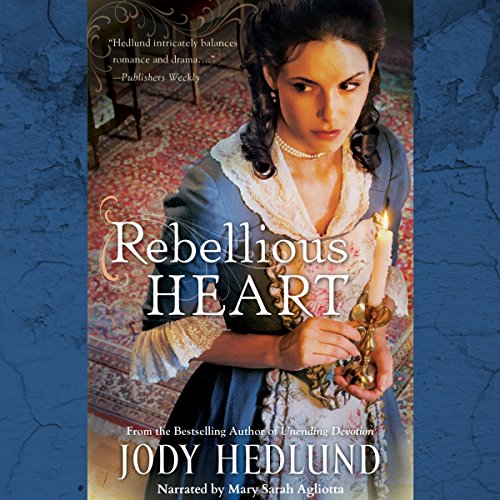 Inspired by the true story of John and Abigail Adams.

A love that would shape history forever.

Because she's a woman, higher learning was always closed to Susanna Smith. But her quick mind and quicker tongue never back down from a challenge. And she's determined to marry well, so she'll be able to continue her work with the less fortunate.

Growing up with little to his name, poor country lawyer Benjamin Ross dreams of impacting the world for the better. When introduced to the Smiths he's taken by Susanna's intelligence and independent spirit, but her parents refuse to see him as a suitor for their daughter.

When the life of a runaway indentured servant is threatened, Susanna is forced to choose between justice and mercy, and Ben becomes her unlikely advisor. But drawing closer to this man of principle and intellect lands her in a dangerous, secret world of rebellion and revolution against everything she once held dear.

I LOVED this book. I highly recommend listening to it. The narrator was very good.

Great suspense throughout, an in depth peek into history and a moving development of true love and friendship.

If you could sum up Rebellious Heart in three words, what would they be?

Ben was my favorite character because of his conviction and courage.

Have you listened to any of Mary Sarah Agliotta’s other performances before? How does this one compare?

I've not listened to any of Mary Sarah Agliotta's other performances, but this one was seamless. It never distracted from the story, only drew me in further. Men's and women's voice were done equally well.

Who was the most memorable character of Rebellious Heart and why?

Susannah was the most memorable in that it was primarily her story and that she underwent the biggest change - from blindly obedient and to courageously principled.

I was impressed with this book. I have read another book from this author that wasn't as well done. If I had realized it was the same author when I chose this book, I might have been a bit more cautious, but I'm glad I wasn't.

I love that it was based on the relationship of John and Abigail Adams, I'm a lover of early American history. The narrator was perfect for the book, as well. Her voice fit with the accent/ style of verbiage used in that era. She also did well differentiating the characters voices, and she did not make long, awkward pauses (as is one of the main complaints narrators receive, that I've noticed).

It had an entertaining balance of mystery, suspense, action, and romance in a good span of time that it didn't feel overdone. It was real, not a fluffy feel-good romance. The romance was, for that time period, flirty and even scandalous. For this time period, it was cute and flirty; even has a "sexy" scene in a tavern.

Overall, I would say that the combination of good writing, the base of the story being historical, and the narrator nailing her performance, it was one of the best books I've listened to on Audible thus far. Bravo!

This was a fantastic book! Well written and well performed. I loved the historical aspect of it.

I could not hear the narrator. She whispers Most of the time. I’ll try this author again in another book..

This is one of the best books I have ever listened to. It will keep you riveted to the edge of your seat! It will break your heart for those treated cruelly at the hands of others. When finished, it will cause you to want it to continue. Superb in every way!!

I chose this book to read it between segments of another book. But I never got back to the other one! It’s because this one was so good. I had read historical novels about other parts of Abigail and John Adams’ lives, but never the early part when they first knew each other and fell in love.

The author did a wonderful job in her writing of this fictional account loosely based on their relationship (given the paucity of information available). Moreover, the narration was exceptional in every sense of what one would look for in a great narrator. I liked it so much that I looked up the over 50 other books narrated by Mary Sarah Agliotta and chose one of them for my next read!

An interesting story - a good listen

Would you listen to Rebellious Heart again? Why?

Yes, I enjoyed the narrator as well as the story

The explanation at the end -where the characters came from.

What does Mary Sarah Agliotta bring to the story that you wouldn’t experience if you just read the book?

Enjoyment ..lol I love to listen!